As a newly transplanted family tries to adjust to the countryside, the son is desperately pulling strings to cure his seriously ill mother. 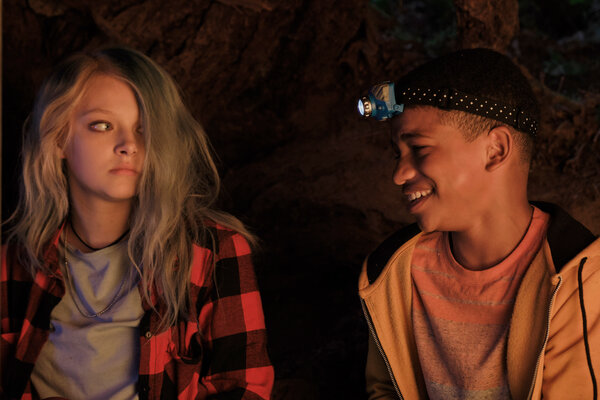 The keen affinity the actor David Oyelowo has for his fellow performers is the best thing about “The Water Man,” his feature directorial debut. Scripted by Emily A. Needell, the picture is a family drama with a supernatural angle, centered on illness.

Lonnie Chavis plays Gunner, a sensitive and creative tween who works on his graphic novel (the inked frames become animated and speak to him as he draws) while his parentsdeal with life in a rural town. (The movie was shot in Oregon.) As the father, Oyelowo is a little dim about his son’s real passions — he accidentally overturns a bottle of Gunner’s ink when asking him to come outside to “toss the ball around.”

And his mother, (Rosario Dawson), is increasingly challenged by illness. One morning, Gunner goes into his favorite fantasy bookshop and says “I’m gonna need every book you have on leukemia.”

Gunner soon learns about “the water man,” a local legend who walks the earth with a flame of hope in his heart. He gets more information from a reclusive eccentric (Alfred Molina). Then he enlists a slightly older semi-Goth tough girl (Amiah Miller) — whose background of abuse is the polar opposite of Gunner’s loving home — in an ill-advised forest trek.

The mythos the movie trucks in carries hints of Miyazaki’s “Princess Mononoke” and the Y.A. novel and film adaptation “A Monster Calls.” But this picture is a more anodyne vision overall; even when the narrative calls in a wildfire to raise the emotional stakes, the viewer remains confident that things will work out. That the movie’s executive producer is Oprah Winfrey kind of tips the movie’s hand; the ultimate point here is that flame of hope.

The Water Man
Rated PG for mature themes. Running time: 1 hour 32 minutes. In theaters and available to rent or buy on Apple TV, Google Play and other streaming platforms and pay TV operators. Please consult the guidelines outlined by the Centers for Disease Control and Prevention before watching movies inside theaters.