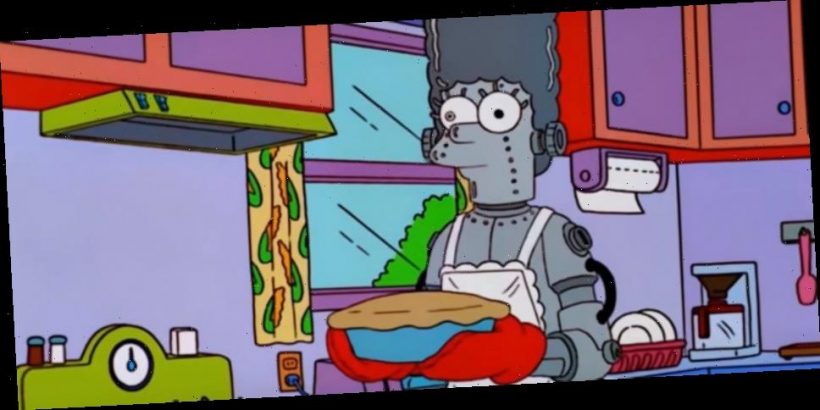 At this point, I think the heat death of the universe will occur before The Simpsons comes to an end. The longest-running primetime scripted show in television history just got longer as Fox has gone ahead and renewed the show for seasons 33 and 34. At one point, I was a Simpsons obsessive, and my brain is a mess of Simpsons quotes and references that go all the way up until, oh, let’s say season 14, at which point I bailed. But obviously, other people keep watching, or Fox wouldn’t keep ordering new seasons.

The video above is from The Simpsons season 13 episode “Gump Roast.” It’s a “We Didn’t Start the Fire”-style parody song that points out the show has been going on for so damn long that it’s reached a point where increasingly ludicrous plotlines might have to start being introduced. “Have no fears, we’ve got stories for years!” the song goes. “Like…Marge becomes a robot!” It’s a very amusing moment poking fun at the show’s longevity, and it becomes extra surreal when you realize there have now been 19 seasons since this song first aired.

And now two more seasons have been ordered by Fox, which will bring the show up to season 34. Regarding the recent renewal, Matt Groening, creator and executive producer of The Simspons, said: “Everyone at The Simpsons is thrilled to be renewed once more, and we are planning lots of big surprises. Homer will lose a hair, Milhouse will get contact lenses, and Bart will celebrate his tenth birthday for the thirty-third time.”

“My biggest move was in the very beginning when I decided to never uncross my fingers,” said executive producer James L. Brooks.

Charlie Collier, CEO, FOX Entertainment, added: “It’s a sincere pleasure to announce the Season 33 and 34 pick-ups for The Simpsons. We keep hoping that, eventually, they’ll get it right. Profound respect for and congratulations to Matt, Jim, Al, and the many other wonderful partners working really hard to finally elevate The Tracey Ullman Show. As they say, ‘practice makes perfect.’”

And Dana Walden, Chairman of Entertainment, Walt Disney Television, said: “Original, brilliant, outrageously funny, prophetic…there aren’t enough positive adjectives to describe this genius comedy which continues to entertain viewers of all ages. Jim Brooks, Matt Groening, and Al Jean lead a team of all-stars who hold such a high bar for themselves and leap over it with each spectacular episode. On behalf of everyone at our studio and the millions of fans of The Simpsons around the world, I want to thank our wonderful partners at FOX for making this a truly great day.”