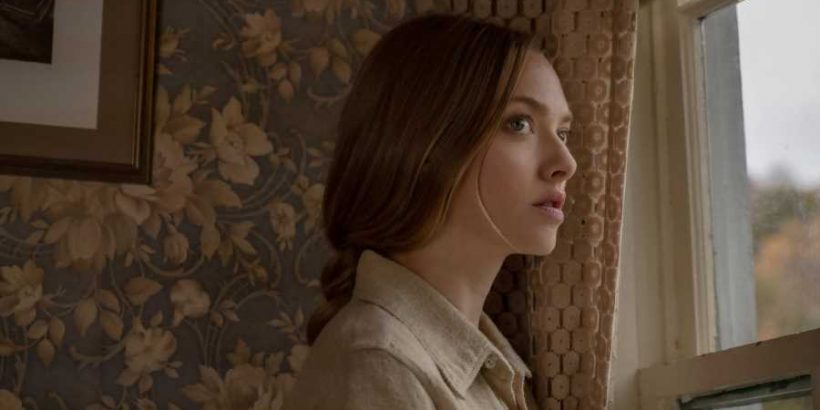 There are ghosts that haunt the houses of New York’s Hudson Valley, we’re told early on in Things Heard & Seen (now screening on Netflix) — the spirits of former owners who may have unfinished business in this realm, or who may be protecting new occupants from possible danger, or who may be right evil bastards waiting to inspire the living to embrace their own inner darkness. The residents of the region, at least in the early 1980s, seem to accept this as a fact of life; some even view it as a perk. And they all know about the Vayle place, which has just been purchased by a young married couple: George Claire (James Norton), a recent addition to the local private liberal-arts college, and his wife Catherine (Amanda Seyfried). It was the sight of a horrible tragedy, which may be why the Claires got it so cheap. Judging from the conspicuously eerie, American Gothic-ish portrait of the place’s original owners that hangs in the offices of the town’s historical society, there seems to be a long history of foul misdeeds connected to this rustic former dairy farm.

As to which type of spirit is currently making her presence known to Catherine and the couple’s young daughter Franny (Ana Sophia Heger), no one knows for sure. But everyone has platitudes on deck for this mom worried about whatever is still loitering from beyond the grave. “Evil only thrives in a house where it is welcomed,” one neighbor says during a seance. “Goodness always wins out…if not in this world then the next,” declares another. “We think own these old Hudson Valley houses,” says a hippiesh friend (Rhea Seehorn), “but we’re really just caretakers… .”

If you experienced an odd sensation of déjà vu upon hearing that last word, you’re not alone. This adaptation of Elizabeth Brundage’s 2016 novel All Things Cease to Appear deals in paranormal activity, but it’s the movie that’s truly haunted — by previous, and far superior ghost stories. Familiarity doesn’t have to breed contempt, and filmmakers Shari Springer Berman and Robert Pulcini pull out enough tried-and-true tricks to suggest they’ve boned up on their Supernatural 101: the self-rocking chair, the odd shimmery presence, the radio that plays even when unplugged, the pale figure lurking unexpectedly in the background that’s mysteriously gone when we pass by again. But you can feel a gap here between filmmakers who may have studied a genre’s vocabulary and those who can use it to further draw out what is, in essence, a deeper story about the evil that men do and the women who suffer because of it.

That second part is present in Things Heard & Seen, especially when it becomes clear that George isn’t a very nice guy. You may stumble upon this conclusion when you see the art-history professor coming on to a very young woman (Stranger Things‘ Natalia Dyer) who isn’t his wife, or when he acts a little too aggressively with Seehorn because she’s giving Catherine “ideas,” or when certain things about his past come into question. Or it might not even occur to you until he finally starts eyeing an axe with a look that suggests something besides making sure the joint is stocked with firewood. (A man frustrated by his own inadequacies who, thanks to prodding from a malevolent force, takes things out on his loved ones and reaches for an axe — like we said, some of this may ring a bell or two.)

Yet the filtering of male toxicity and female vulnerability through the lens of horror, something the book does eloquently, feels almost incidental here; the use of things that go bump in the night and easy scare tactics feel superficial at best. None of this feels like a natural fit for Berman and Pulcini, who’ve always excelled with tales of kooks, freaks and eccentrics; their 2003 take on Harvey Pekar’s American Splendor remains the gold standard on how to make a biopic and adapt a graphic novel in one fell swoop. (See also: their wonderfully offbeat The Extra Man from 2010.) In fact, the only scenes that come alive in this collision course of gothic narratives involve a dinner with Seehorn’s upstate free spirit and her equally touchy-feely husband played by James Urbaniak, and a college faculty shindig that threatens to inch into Who’s Afraid of Virginia Woolf territory. We’d love to see those alternate-universe movies, the ones buried beside the by-the-numbers boooooo rehashes, instead.

“He understood that everything in the natural world had a counterpart in the spiritual world,” says F. Murray Abraham’s senior professor to George, in reference to the latter’s dissertation paper on a “mystic” artist; it is, alas, one of many lines that the Oscar-winning actor has to say that continually reduce him into someone we’ll call F. Murray Exposition. But it helps signal that Catherine has a spirit of her own to contend with as well, and that the earlier “goodness always wins out” notion will most certainly get a voiceover reprise. She is also a hero who seems to have a lot of business to deal with, from an eating disorder to that hunky teen (Alex Neustaedter) doing work around the house — he, too, has a connection to the property — yet lacks the dimension that makes her something besides a caricature of a woman in danger. You applaud Amanda Seyfried for doing so much of the heavy lifting, and for once again proving that a close-up of someone looking unnerved is worth a thousand wonky exchanges. Still, not even she can keep the wheels from falling off when the second half tries to trade in gaslighting for ghosts and never finds the tone it needs to make the transition. Without that crucial element, all is lost. You’re just left with a lot of things you’ve heard and seen before.