This small-town comedy from New Zealand looks at the romance between a country girl and a man accused of killing his family. 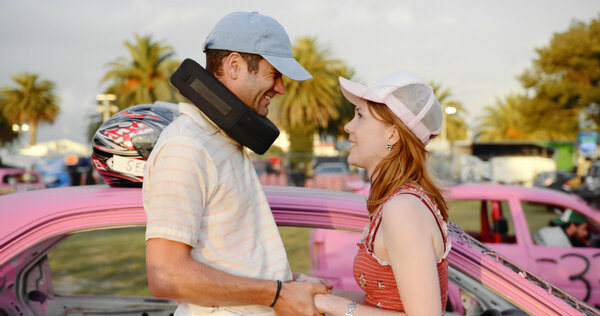 Set in rural New Zealand, “This Town” wrings dark humor from an off-kilter premise: Sean (David White, also the writer/director), a young man accused of murdering his entire family and then let off on a technicality, falls in love with a naïve country girl, Casey (Alice May Connolly). Parodying the loose tongues and petty aspirations of kooky small-town types, White’s film borrows the mockumentary trappings of deadpan comedies like “The Office.” But beneath the movie’s wry exterior is a pungent darkness — a streak of real-life danger that’s more wince than cringe.

Take, for instance, Sean’s obsession with guns. It’s one of the red flags that Pam (Robyn Malcolm), the cop who quit in rage when Sean was acquitted, has on the evidence board where she continues to gather proof of his possible guilt. Another one of Pam’s clues is Sean’s alleged drunken sexual assault of her nephew’s girlfriend. It doesn’t help that Sean is awkward and inscrutable. When he meets the guileless Casey on a dating app, and they hit it off over Chinese food and Pink “Munta” (a bastardization of Fanta), Casey’s friends and family are alarmed.

As will be any viewer familiar with the realities of misogyny. The mystery of whether Sean is a misunderstood “good guy” or a sociopathic killer keeps “This Town” on a tightrope between twee comedy and “Dateline” drama, toying with the anxiety that gendered violence instills deep in many of us. Yet White squanders the opportunity for true satire, speeding past the many topical issues kicked up by the script — police corruption, mental health, gun crime — into a feel-good conclusion that leaves a bad taste in the mouth.