Venom opens with a shot of outer space and a ship crashing through the atmosphere, carrying a deadly cargo towards the Earth.

But director Ruben Fleischer has revealed that there were plans to give the first scene of Tom Hardy’s superhero movie a harder science fiction edge – with the help of a whole planet of aliens.

“The beginning of the movie was a hard one,” he told Cinema Blend. “Like, how much do we want to tell the backstory?

“There was a version [of the opening] where there was a planet crawling with tons of symbiotes that were collected and taken back to Earth by the Life Foundation. They had encountered them. But it kind of felt like, my instinct was it would be better to keep it more mysterious and just know that they’ve retrieved something from space. We don’t know exactly by what means or how.

“Jenny [Slate]’s character later says they encountered it on a comet that was passing, and they retrieved these samples and brought it back to Earth. But yeah, I thought it was better just leave it a little bit mysterious, the backstory of the aliens.” 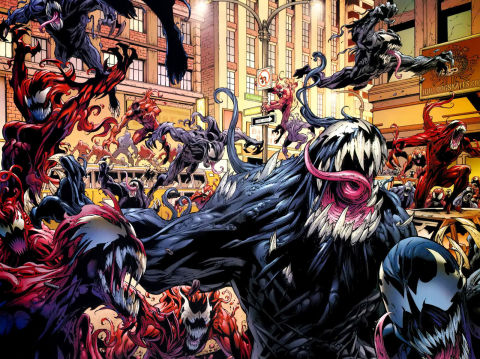 “We toyed with some art work that we loved,” added producer Matt Tolmach. “We toyed with it. But we wanted the movie – it’s out there. It’s part of our mythology. It’s part of our backstory, Klyntar and where this all came from and who knows what’s next. But, it made sense to, in this movie, to let the origin of those things kind of unravel in the storytelling as opposed to going [to that planet].”

As a sequel to Venom is already in the works, there’s still a chance to explore the symbiotes’ home planet at a later date.