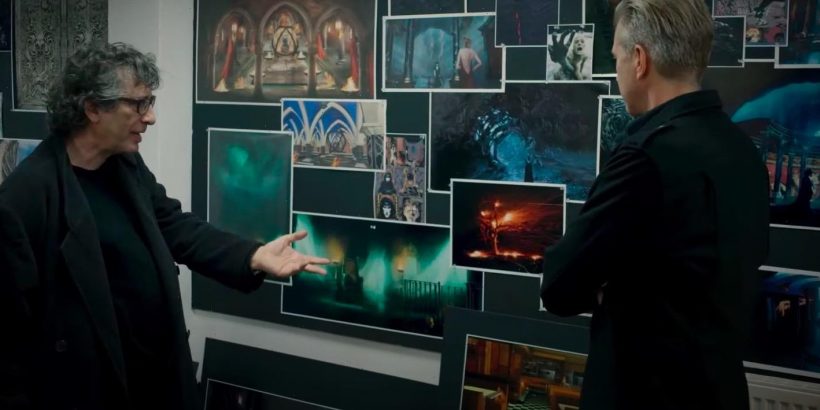 When Neil Gaiman conceived of the twisted, terrifying, expansive world of The Sandman more than 30 years ago, it was limited to the pages of a comic book — and to his own strange mind. But soon we’re going to get an idea of what it’s like to step into Gaiman’s dreams with Netflix’s The Sandman TV series, the long-awaited screen adaptation of Gaiman’s award-winning comics. But could real-life even begin to replicate the wild wonders of the the Sandman comics? According to Gaiman, who introduces this new behind-the-scenes sneak peek released during Netflix’s Geeked Week, they get pretty close.

The Sandman Behind the Scenes Sneak Peek

“For 32 years, anybody who read Sandman, read the comics. And that world is ending,” Gaiman says in the featurette, which shows the author and executive producer of Netflix’s Sandman arriving at Shepperton Studios, the U.K.-based production studio where the fantasy-horror series is getting made. “I’m getting to see what happens when you bring dreams to life,” he adds.

The Sandman star Tom Sturridge, who will be playing Morpheus, the anthropomorphic personification of Dream, appears in the sneak peek, as does Gwendoline Christie, who will be playing Lucifer, to praise the immaculately detailed work of the production in bringing the world of Sandman to life.

But no other reaction is better than Gaiman, who is clearly giddy with delight throughout the whole video, as he tours the production studio and is invited to look at props of ravens and strange Dreaming monsters, and at concept art that looks to be a stunning realization of the settings of Gaiman’s original comic. At one point he wanders the Undercroft and marvels at how it looks just like he imagined, all those years ago.

“Our art department, our set decorators, our production designers, they are wizards,” Gaiman said. “They are absolute magicians. And to see what they’ve conjured here, it’s like walking around inside your own dream.”

A rich blend of modern myth and dark fantasy in which contemporary fiction, historical drama, and legend are seamlessly interwoven, ‘The Sandman’ follows the people and places affected by Morpheus, the Dream King, as he mends the cosmic — and human — mistakes he’s made during his vast existence.