The creative forces behind the new movie “American Utopia” were in search of a sense of connection and community even before the pandemic. 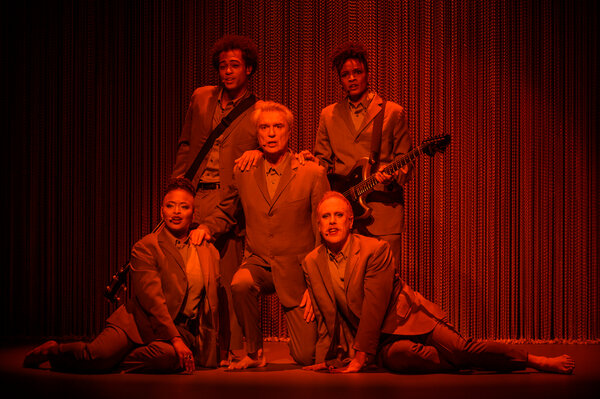 A packed theater. A booming band. Dancers pounding across the stage in unison. And in the middle of it all: David Byrne.

It was only February when the Hudson Theater played home to the last sold-out performance of the theatrical version of Byrne’s 2018 album, “American Utopia,” before the pandemic shuttered Broadway.

Now, in one of the rare saving graces of this year of cultural shutdowns, the show has been made into a film directed by Spike Lee.

Reviewing “American Utopia” on Broadway, the New York Times critic Ben Brantley called it an “expansive, dazzlingly staged concert,” and added, “Byrne puts the central tenet of making contact with a world outside your mind into dynamic, sensory practice onstage.”

That search for connection has taken on even more urgency and meaning now as the coronavirus is keeping audiences and artists apart. Anyone watching the movie (premiering Oct. 17 on HBO and HBO Max) will feel a deep nostalgia for the power of live theater. 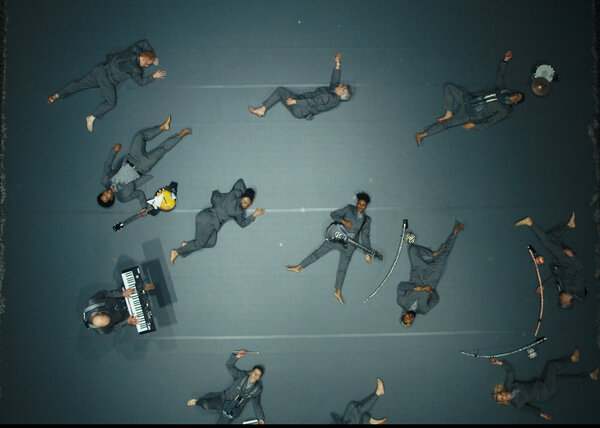 A filmed concert featuring songs from Byrne’s band Talking Heads might seem like a bookend to the 1984 concert film “Stop Making Sense.” But the “American Utopia” creative team — Byrne and Lee as well as the cinematographer Ellen Kuras and the show’s original choreographer, Annie-B Parson — was focused on a sense of community and communal energy even before the pandemic hit.

“American Utopia,” Byrne said, is about a person who “starts off kind of living inside his head. And then finds a connection with a small community that would be the band, and this person, by the end is making a connection to the wider world, the wider community, engaging with bigger issues.” Wearing a T-shirt and his signature shock of white hair, on a Zoom call from his home in Manhattan, he added, “It’s a look at my story, but it’s also a story that a lot of people have gone through or are going through.”

The film features him and 11 musicians and dancers and builds on songs from the album as well as a few Talking Heads classics and a powerful cover of Janelle Monáe’s protest song, “Hell You Talmbout.” Unique to the film, that number also features family members holding photographs of loved ones killed by police violence.

The show’s lyrics touch on everything from the workings of the brain to politics and social justice. Parson’s gestural choreography adds a dimension that helps give the show structure.

Byrne said he contacted Lee about directing the film before it was even on Broadway, when it was being workshopped in Boston. Lee’s visual style was one draw, but there was also the fact that the material brings up a lot of social issues. “It’s a big part of what the show is,” Byrne said. “And I thought, well, of course, you know, Spike is going to get that.” He added: “It’s not a conventional narrative, but there’s an arc. And I think I thought he’ll see that as well and actually see the band as like a character.”

Lee signed on after watching just two performances. “I knew right away during the matinee show there’s something I want to do,” the director, wearing his trademark cap, said by Zoom from his Brooklyn office. “I was very in sync with the ideas that David was playing with.” He looped in Kuras, who has worked on several of Lee’s films, going back to the 1997 documentary “4 Little Girls.”

There are similarities to “Stop Making Sense,” which Jonathan Demme directed to wide acclaim. The new show also begins with Byrne alone onstage, the band slowly filling in the space. There are also suits and propulsive percussion. But what is most remarkable is Byrne’s energy. Reviewing “Stop Making Sense” in 1984, Roger Ebert wrote: “The film’s peak moments come through Byrne’s simple physical presence. He jogs in place with his sidemen; he runs around the stage; he seems so happy to be alive and making music.”

It’s this same exuberance that Lee and Kuras capture in “American Utopia,” only now Byrne is 68.

Both Lee and Kuras, however, shied away from drawing too many connections to Demme’s movie. They wanted this film, they said, to stand on its own.

Speaking from Nyack, N.Y., Kuras explained: “Spike said to me, ‘I want to get inside and I want to do it in a different way.’ We know we have a precedent. We both talked about it.” Instead, Lee “really wanted to honor the choreography, wanted to honor the sense of community,” she said.

Of course, Lee added, Byrne was proud of the earlier film. “That’s his legacy,” he said. “But he’s an artist. Great artists keep going.”

One of the most powerful moments in the new film centers on the stirring cover of Monáe’s “Hell You Talmbout” and the naming of victims of police violence. It was Lee who brought in their loved ones. “Here’s an opportunity to show their faces,” Lee said. “And to have their loved ones hold up their beloveds who are no longer here. It’s very, very emotional.” He added: “What’s so sad is that every time Ellen and I would go to see a show, we would go backstage and we would tell David there is somebody else to add. Even after we finished shooting, you know, we had to add, George Floyd; It’s very deep.”

Another element that distinguishes the film from the stage version are the visuals of Parson’s choreography. Lee said he was thinking a lot about musicals and Busby Berkeley. “My mom was dragging me to musicals from a very young age,” he said. “And I understand that to do choreography, the camera has to follow the dancers.”

“The camera is going to move,” he said, explaining that the choreography “was telling us where the camera should go.”

Especially striking is the way the camera follows the dancers and musicians from overhead. To get these shots, Lee and Kuras watched the show multiple times together and came up with locations for 11 cameras. One is set at the back of the stage. “We wanted to break the fourth wall,” Lee said, “So we feel part of it, so we’re inside of it.”

Filming took place over two days, and Lee said the energy from the performers was contagious. So much so that during certain numbers he said he couldn’t stay in the basement where he was monitoring the shoot. “For some numbers,” he said, “I would run upstairs and I’d be jumping up and down with the audience. Just ‘Burning Down the House.’”

Now, months later, both Lee and Byrne are thinking about how much has changed for artists and the city they call home. Byrne has been leading cast members on impromptu bike trips to Staten Island, Queens and other boroughs. It’s a way to keep connected until they can get back in the theater.

Both Byrne and Lee pushed back on any notion that after being rocked by the pandemic, the city as a cultural capital is on the wane. “New York has lived through 9/11, the recession, Sandy,” Lee said. “You know, New York is never going to be done. We’re built for this. Artists are going to tell the true story of what happened during this crazy time we live in. There is great art that is going to come out of this. I’m convinced the artists once again will lead the way.”

Byrne added that artists and performers “have our kind of civic duty as citizens just to respond to the world that we see around us” and “that’s what we’re doing.” Then again, he said: “I felt that more in recent years than I have in the past. It could be my age, it could be what’s happening.”