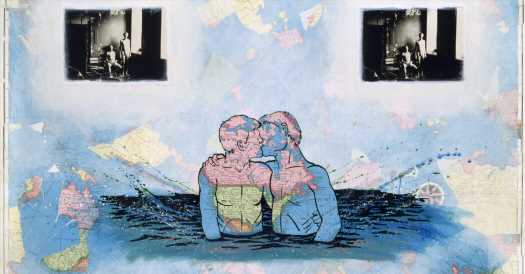 The artist David Wojnarowicz escaped one American hellscape to find himself smack-dab in the middle of another. In a 1985 short film he made with Richard Kern, “You Killed Me First,” Wojnarowicz, then in his early 30s, portrays a version of his own alcoholic, abusive father. The grindhouse-style underground movie depicts a real event — that father feeding his children’s pet rabbit to them for dinner.

Directed by Chris McKim, this exemplary documentary on the artist (which is also a mini-chronicle of the East Village art scene of 1970s and ’80s New York) takes advantage of Wojnarowicz’s penchant for self-documentation, drawing on the cassette journals he began keeping even before he was a fully formed creator. The documents Wojnarowicz maintained in this period, during which his art became inextricable from his activism, guide the viewer into the second American hellscape Wojnarowicz experienced: the AIDS epidemic.

Wojnarowicz’s insistence that the Reagan administration was practically gleeful in ignoring the disease while simultaneously stigmatizing its victims provoked a number of controversies, over arts funding and more. The work he produced, often in collaboration with or under the influence of the photographer Peter Hujar, his mentor, is still bracing and fiercely clear-eyed on political and moral issues that persist to this day. Wojnarowicz died of AIDS in 1992, at age 37.

The movie eschews contemporary talking-head interviews, instead showing speakers such as Fran Lebowitz, a close friend of Wojnarowicz and Hujar, as they were in the late ’70s and early ’80s. This is a strategic move, designed to make the movie’s final scene — in which several survivors of the artist and the era, now much older (a couple more frail than others), are shown attending a 2018 Whitney retrospective of Wojnarowicz’s oeuvre — more powerful. It works. Shatteringly.