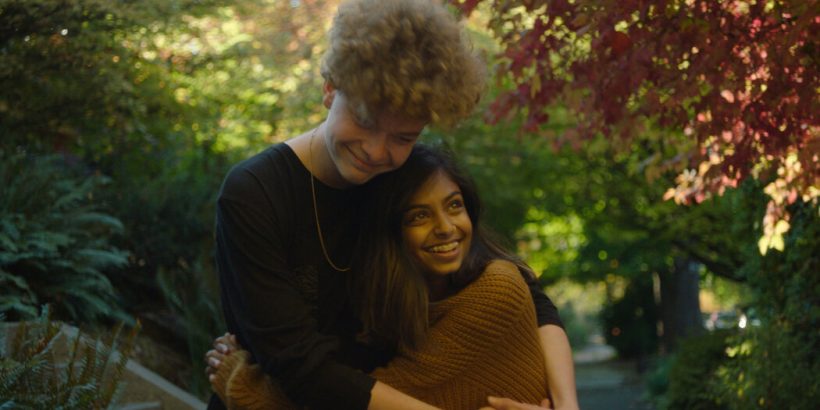 The indie romance “Young Hearts,” by the sibling team of Sarah Sherman and Zachary Ray Sherman, feels like an algorithm-generated product of its time. A clear attempt to follow the subgenre of acne-baring teen films of recent years (“Eighth Grade,” “Lady Bird”), this one misses its landing.

A mutual attraction develops between Harper (Anjini Taneja Azhar), 14, and her older brother’s best friend, Tilly (Quinn Liebling). Sarah Sherman supplies deliberately inelegant lines for Harper as she tries to flirt with Tilly on an autumnal walk home. “Leaves are, like, really cool,” she tells him.

The film’s hand-held camerawork contributes to the amateur aesthetic. But what initially feels like a creative choice to capture adolescent authenticity quickly becomes painful. Imagine mumblecore with actual mumbling and no wit, even though those lo-fi auteurs, the Duplass brothers, are executive producers.

When Harper and Tilly lose their innocence, they also (temporarily) lose the person closest to them: Harper’s brother Adam (Alex Jarmon), who doesn’t ship this couple, finds out about them during a music montage that undercuts the emotional impact.

Identity-shaping details are glossed over, too. Harper, who was adopted by white American parents, was born in India and defines her feminism through that country’s strict laws limiting reproductive rights, but the political themes she raises feel slightly disconnected from the narrative arc.

Although Harper and Tilly share a mutual first sexual encounter, their public reputations diverge (she is labeled the school harlot). The film’s premise itself is not original, but what is even more frustrating is the film’s timid handling of the story, opting for a grand finale monologue in which Harper throws out buzzwords like “racial tolerance” and “inclusivity” without their bearing any weight.

Young Hearts
Not rated. Running time: 1 hour 21 minutes. In theaters and available to rent or buy on Apple TV, Google Play and other streaming platforms and pay TV operators. Please consult the guidelines outlined by the Centers for Disease Control and Prevention before watching movies inside theaters.