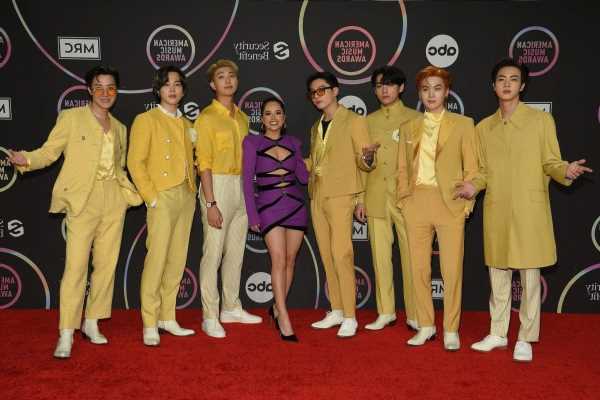 There is nothing sweeter than a celebrity friendship. The 2021 American Music Awards took place on Nov. 21. At the award show, Becky G reunited with Jin, Suga, J-Hope, RM, Jimin, V, and Jungkook of BTS. In 2019, J-Hope and Becky G collaborated on J-Hope’s single “Chicken Noodle Soup.” At the 2021 AMAs, Becky G called the members of BTS her “homies.”

On the red carpet for the AMAs, Becky G shared her thoughts on the Korean septet.

“BTS is here, the homies,” Becky G told Entertainment Tonight. “I love them. We literally got here at the same time. We were catching up ’cause I haven’t seen them in so long.”

In the interview with Entertainment Tonight, Becky G also shared that she hopes she will be able to see BTS perform in their upcoming concerts, Permission to Dance On Stage — LA.

“They have a show in LA coming up, so I’m trying to see if I can make a little, you know, situation happen,” she said.

In a 2020 interview with StyleCaster, Becky G discussed the collaboration and shared how much she admires the band.

“For me, it became a very personal thing. It wasn’t just, ‘Oh. Because K-pop is really popping right now, I got to support it.’ When I met J-Hope, it was genuine inspiration from an artist who works his a** off. These guys do not miss a beat,” she said of BTS.

Becky G continued, “They pay attention to every single detail. As an artist, to have that experience was the most inspiring to me. It wasn’t ‘Oh, this huge movement of K-pop’ that you gotta get onboard with.’ It was more about what they do and how they do it.”

Throughout the 2021 AMAs, fans witnessed multiple interactions between Becky G and the members of BTS. While the musicians reunited on the red carpet and at the award show’s press room, Becky G also went out of her way to greet and catch up J-Hope.

The artists’ sweet friendship is no surprise to fans. In the interview with StyleCaster, Becky G shared that she and J-Hope make an effort to keep in touch.

“We check in on each other and see how each other is doing. I find it so inspiring. He’s really involved in a lot of other aspects of being an artist. He isn’t just someone who sings a song and performs. He’s a true creative person,” she said in the interview.