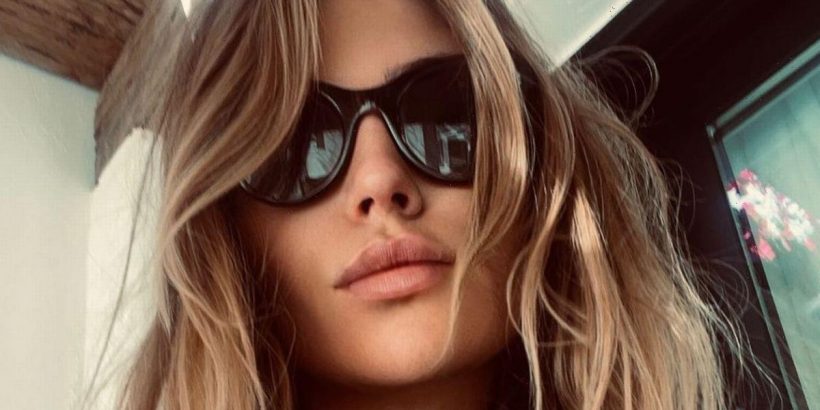 Abbey Clancy put on a racy display in a tiny snakeskin bikini, and she certainly wasn't afraid to show off her jaw-dropping figure.

The Britain's Next Top Model star knows how to own a steamy shoot, and this week she posed up a storm in a skimpy beige snakeskin bikini.

The stunning model, 36, sizzled in a tiny triangular patterned garment, which was held together on her chest by a golden ring piece.

Athletic Abbey let her killer figure do all the talking in the bikini, which gave way to her toned tummy and enviable assets.

Down below, Peter Crouch's wife was wearing a matching beige thong that was tied up at the sides above her endless tanned legs that she crossed over gracefully.

The blonde bombshell looked radiant as ever as she leaned on a wooden structure and shot a sultry stare down the lens.

She let her lush locks flow freely onto her chest and accessorised with a pair of stylish shades and beige bangles that complimented her beach combo perfectly.

The glamorous mother-of-four took to Instagram with the snap on Saturday (April 16) as she shared a slew of snaps from her latest beach photoshoot.

Catching up with her 518,000 followers over the Easter weekend, Abby simply penned a sun emoji to suggest she was enjoying the sunny weather.

It comes after Abbey gave her fans a glimpse behind the scenes of her recent beach shoot.

The mum wasn't shy in tucking into a slice of pizza after her sun-kissed modelling session.

Abbey was feeling leisurely in an oversized hoodie, which she threw over her leopard print bikini.

The ex-Strictly Come Dancing champ recently enjoyed a family holiday in Dubai with her former footballer hubby Peter and their four children.

Abbey has been presenting Britain's Next Top Model since 2015 – after winning BBC's Strictly in 2013.

She was the runner-up of Britain's Next Top Model in 2006.