It would be an exaggeration to say the support act blew the main attraction off the stage, but in Mini Mansions, Arctic Monkeys had mood-setters par excellence.

The LA quartet and Sheffield's finest (also now based in the City of Angels) have links aplenty, and those were made manifest when the Monkeys' Matt Helders joined Mini Mansions onstage as a second drummer for Mirror Mountain, the final song of an energetic, frenetic opening set. 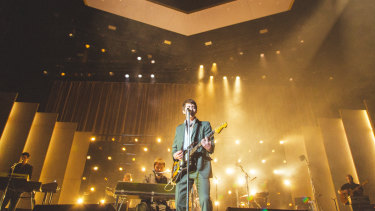 That said, it was their earlier material that got the biggest responses: Brianstorm (from 2007's Favourite Worst Nightmare) had the moshpit bouncing, and Helders' extended drum solo drew whoops of delight – even if it seemed to have drifted in from a planet far removed from the song's post-punk origins. From the same album, 505 had everyone singing along. Don't Sit Down 'Cause I've Moved Your Chair, Arabella and Do I Wanna Know? were highlights too.

The set-up was simple: a thick curtain behind and a hexagonal lighting rig above, which dropped for the newer songs, heightening the sense that we were in a lunar lounge bar.

By and large, the Monkeys are not a band given to on-stage theatrics – though in Turner they have not only a terrific lyricist and singer but a frontman capable both of snarling punk and a suave crooning style that might have given Bryan Ferry (playing at the same time just a few hundred metres away at Margaret Court Arena) a run for his money.

There was no Why'd You Only Call Me When You're High?, but the set finished with a blistering rendition of breakthrough single I Bet You Look Good on the Dancefloor. 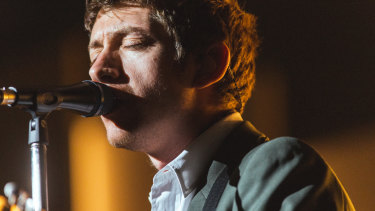 Turner is a terrific lyricist and singer, equally capable of punky snarl and suave crooning.Credit:Rick Clifford

A short encore more or less summed up an evening that offered a guided tour of what has become a seriously impressive songbook: Star Treatment from the latest album – during which a square mirror ball (a mirror cube, I guess) descended from the rafters – was followed by singalong hit No. 1 Party Anthem before R U Mine? wound things up.

No theatrics, just terrific rock'n'roll played by a band at the height of its powers.