It's a question I've been hearing for decades, applied to any number of seasoned performers I've covered: Why are they still working?

I heard it plenty when Frank Sinatra was deep into his 70s, still selling out arenas around the world. Also when Cab Calloway was in his 80s, joyously strutting up and down the stage snarling Minnie the Moocher.

And, of course, now regarding singer Tony Bennett, who will turn 93 in August. The implication is that after a certain age, musicians no longer sound as they did in their "youth" or "prime" – two loaded terms that, in this context, seem designed to diminish artists of exalted age and experience.

So why do these legends sustain careers for so long?

"I didn't try to do that, but it's happening," says Bennett, who has few peers or precedents when it comes to pop/jazz singers flourishing in their 10th decade.

"So I'm thrilled about it. I've had a wonderful life doing what I love to do, and the public accepts me for it."

The turnouts Bennett draws around the world suggest he's right, yet more than one sceptic has said the old master should have yielded the spotlight years ago. How wrong they are.

When a performer of Bennett's vintage takes the stage, we're encountering more than just how they sound on any given night (though Bennett's command of a large repertoire, remarkable accuracy of pitch and inextinguishable sense of style defy the passage of time). Because these legends have been in our lives for so long, their very appearance onstage calls forth memories richly worth treasuring.

Better still, elder performers represent eras that without them simply would slip into the history books and, then, into obscurity. So when Bennett, for example, sings Because of You or Rags to Riches or Street of Dreams or What Are You Doing the Rest of Your Life? – tunes he helped make famous – he's showing us how this music ought to sound. Younger performers, of course, will invent their own worthy interpretations, but Bennett, Sinatra, Fitzgerald and other innovators set a standard against which the rest will be judged. 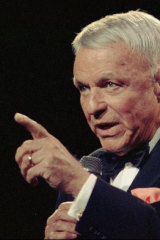 Frank Sinatra, seen here in 1990, set the bar high when it came to longevity.

The ultimate example is Sinatra, whose decades-long career set an unassailably high bar for several musical traditions, from his dulcet-toned melody-making of the 1930s and '40s to his euphoric swing singing and brooding ballads of the '50s to his extraordinarily subtle bossa nova work of the '60s and so forth.

When it comes to interpreting jazz-tinged repertory, Sinatra taught the world how to sing. Those of us lucky enough to have heard him in person can cling to artistic experiences more vivid than any recording could match.

"He meant everything," says Bennett, who long considered Sinatra not only his best friend but a role model.

"Because when I was on my way up, he was way over on top," says Bennett. "He was so supportive of me … Whenever he said something good about me, it made me feel that I was communicating."

Meaning that Bennett, too, learnt from the master, those lessons absorbed not just from recordings but from the uncounted Sinatra performances Bennett witnessed. More than anything, Sinatra surely taught Bennett – and all who have come after – how to turn a mere pop song into a work of high art.

When performers of this stature are still able to perform in the autumn of their years (or even the winter), we are not merely entertained but enlightened, an opportunity not to be missed.

True, though Bennett's singing shows virtually no concessions to the passage of time, some – maybe most – jazz and classical performers lose a degree of technical acuity through the years.

When Fitzgerald sang her last Chicago-area performance, at the Ravinia Festival – in 1991 at age 73 – her instrument did not convey the sensuous tonal beauty of an earlier era. Yet her spirit of invention was as formidable as ever, if not more so: "Scatting to the changes of Dizzy Gillespie's A Night in Tunisia," I wrote in my review, "she threw in clicks, pops, shouts, yowls and whatnot, all conforming to the tune's harmonic scheme. Only Fitzgerald would end such a feat with a few snippets of the old Russian folk song Dark Eyes."

In effect, Fitzgerald proved that a great artist need not be encumbered by the physical limitations of age, her creative spirit enabling her to keep listeners engaged by inventing sounds never heard from her before.

When Sinatra gave his last Chicago performance – at the United Centre in 1994 at age 78 – he could not sustain long-held notes that once were valuable expressive tools for him. So he simply cut certain pitches shorter. Nonetheless, he drew screams of approval from listeners at will by toying with their expectations. In the anthemic New York, New York, for instance, he held back certain climactic notes until the last possible moment, the place erupting when he finally reached the peak of the phrase. 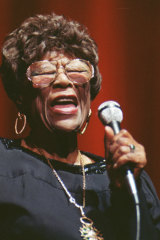 Or consider pianist Rubinstein's last Chicago performance, in Orchestra Hall in 1976 at age 89. The vicissitudes of age had affected his pianism but not his music.

"In Schumann's epic Carnaval … it became obvious that the stories of Rubinstein's visual impairment were true," I wrote a few days after his death – in 1982 at age 95 – in recalling that performance. "The treacherous keyboard leaps in this piece were at times too much for a man who by now had only peripheral vision.

"But in an odd way, the occasional wrong notes and inadvertent dissonances were a testament to Rubinstein the musician. For despite the personal obstacles, Rubinstein was playing in the grand manner of the 19th century from which he came … Ravel's Valses nobles et sentimentales were played with a colouristic imagination that only someone who lived during the first dawn of Impressionism could have conjured up."

So in his farewell performance for Chicago – in a room where, he told the crowd, he had first performed in 1906 – Rubinstein brought us the sound and character of an era that you could say ended with his death.

Not even the most brilliant of today's young performers could provide that.

Or as Bennett put it to me in our recent conversation, "I could do this 25 years from now, and it will still sound brand new to someone who's heard it for the first time."

That's just one reason, among many, we need Bennett and artists of his standing to perform for as long as is humanly possible.