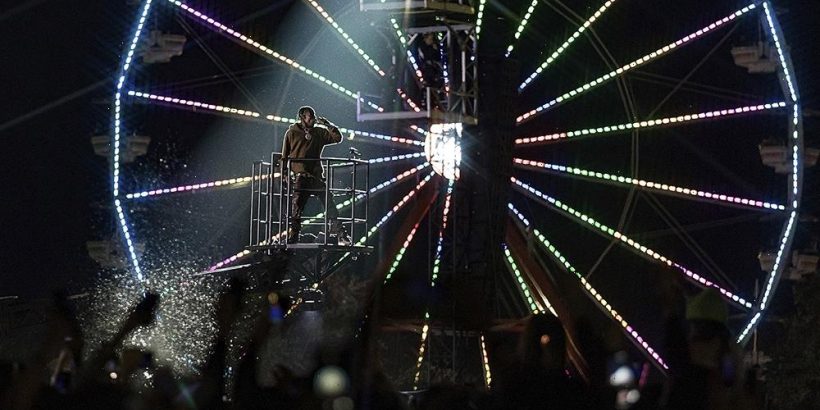 For more than 50 years, there was one word that crystallized the usually unspoken fear that a major concert event could turn deadly: Altamont. Now, for years to come, and maybe even generations, barring any worse disasters, that buzzword is likely to be Astroworld. And however the investigations and lawsuits play out, what went down at NRG Stadium on Nov. 5 — where nine lost their lives — will, in the public imagination, likely be Travis Scott’s mass-casualty event to bear.

Saying that Astroworld is going to be Scott’s Altamont sounds harsh — but, really, that might be a best-case scenario for the rapper. How badly did things turn out for the Rolling Stones, ultimately? There was a tarnishing of their image from having been at the helm of a festival that’s still legendary for its fan fatality — something they’ll always carry, but increasingly as a minor footnote in their rich history — yet they’ve gone on to remain superstars who still fill stadiums a half-century-plus later. The band was Teflon. So, following in their footsteps, Scott suffers such career damage from this catastrophe that he’s still headlining stadiums in 2071? He should be so lucky.

He may not be. There’s a key point of comparison that may be useful in thinking how this may not turn out to have as much of a best-case-scenario as the Stones enjoyed in playing out their career. The Altamont debacle revealed itself slowly, in a pre-Internet age, after Meredith Hunter was killed by bikers the Stones’ organization had foolishly drafted as security for the Dec. 6, 1969 event. It took until a Jan. 21, 1970 Rolling Stone cover story for many of the details to really become known, in a gradual dispersal of outrage that seems unfathomable in the instant-judgment chambers of 2021.

Not many people saw any footage of the mayhem until the “Gimme Shelter” documentary included a scene of members of the Stones gathering in an editing bay to watch raw 16mm reels that were about as murky as the Zapruder JFK assassination footage. The Maysles brothers’ film, which wasn’t all that sensationalist and largely left viewers to fill in their own to figure out how affronted to be, was released Dec. 6, 1970 — exactly one year after the fateful, fatal concert.

In 2021, of course, everybody’s a Maysle brother, carrying a world-class documentary movie camera in their pockets. And the “Gimme Shelter” filmmaking team could have only wished to have footage of young men and women climbing onto platforms to plaintively scream that people were dying and the show needed to be stopped… or the Instagram video with a shocking perspective that showed Scott continuing to perform as a lifeless-looking body was being passed overhead by the crowd seemingly almost under his nose.

Any one social media clip does not provide a big picture of what was going down. So is it not just possible but highly likely that Scott couldn’t see below from his floodlit perspective? Could it even be true, as one of Scott’s attorneys said in a news conference Friday, that when the performer briefly paused the show as medics drove into the audience to retrieve victims before abruptly restarting it, that he couldn’t be sure whether he was seeing a golf cart or an ambulance? Without yet knowing what, if any, information was being fed into Scott’s earpiece, does he have plausible deniability when it comes to being aware that he was presiding over injury and death for the hour-plus duration of his set?

There’s a good chance that he was in that protected and impenetrable of a bubble during what looks on the surface like callous indifference. Just as Mick Jagger had little or no clue that actual bloodletting was going on on his watch. But in this case, the riveted watching world knows what it thinks it sees. Moreover, even if Scott turns out to be blameless for what he could or couldn’t see or hear once his set started, there’s still the matter that this was his festival, just as Altamont was the Stones’ brainchild, and the buck has to stop at the top of the bill. Maybe a succession of investigatory boards and juries will find that to be so in Scott’s case, or maybe promoters, security or even law enforcement will end up bearing the brunt of the legal heat. What’s for sure is that any angry public currently has a mindset of Sue ‘em all and let God sort ‘em out, with Scott at the top of a substantial litigation heap.

There will be a great deal of side-eye to come as ridiculous defenses are offered in the days to come as well as realistic ones. At Friday’s news conference, Scott’s rep, Former Mayor of Baltimore Stephanie Rawlings-Blake offered the somewhat risible argument that his client had no power to halt his own show. “This notion that Travis had the ability to stop the concert is ludicrous,” Rawlings-Blake said. “They have a 59-page operations plan and it clearly says the only two people that have the authority to stop the concert were the executive producer and the concert producer.” Because we all know that even in the event of a heart attack on stage, a performer is obligated to just keep going, without medical assistance, until an executive producer can be reached. And of course we all remember Jason Aldean on stage at the Route 91 Harvest Festival in Las Vegas, calmly remaining on stage and continuing to finish his set despite 60 people being mowed down, because the promoter couldn’t be reached to authorize his retreat. (This is sarcasm, just for the record.)

If it turns out that Scott is rendered legally innocent, how will he fare after it’s all shaken out? Will he get a mass pardon from a public that leaped to conclusions? That would likely be a split verdict. Even performers who’ve been accused and convicted of the most heinous crimes possible can hold onto significant parts of their fanbases, as anyone who’s followed the R. Kelly saga can testify. Public affection at large does not have a morals clause — at least not with artists who’ve already cultivated an outlaw image. Culpable for anything or scot-free in the end, Scott will long have a massive following either way. What may suffer is his ability to make extracurricular mainstream deals: Imagine how fast McDonald’s would be swimming away from him right now if the Travis Scott meal deal hadn’t expired a year ago. And at least in the short term there’ll be a crimp in his ability to tour (Scott had to cancel a $5.5 million gig in Saudi Arabia, for example). Whether he was relieved of headlining duty from this weekend’s Day N Vegas festival or proactively withdrew, that gig was just not going to happen… and it’s unclear whether his main stage closer status at the 2022 Coachella Festival will land on the right side of mass exoneration, but his fans shouldn’t be counting on it.

What won’t go away any time soon, whether it has to do with Scott concerts particularly or shows generally, is how this tragedy has tapped into fears we may not all realize we even had. There have been much deadlier gigs that this one, which may have instilled a healthy dread of what can go wrong at a concert and how quickly. There was the Who trampling disaster of the late ‘70s, which went down before the show even started. There was Rhode Island’s Station nightclub fire of 2003, which left a staggering 100 dead. The aforementioned Route 91 Harvest Festival in 2017, where 60 lost their lives. But those tragedies were nearly instantaneous and didn’t leave behind untold hours’ worth of YouTube and Instagram footage, not to mention a high-definition Apple Music stream, in which the world could see chaos and yet the show must go on. It wasn’t experienced that way by everyone at the show; people at the back of the crowd reported they didn’t know what was afoot, and they went out for an untroubled dessert afterward, just like Scott and Drake went out to party at Dave and Buster’s until reality kicked in. But watching those videos of people yelling and screaming in vain, unable to get anyone’s attention, it felt like being at Carrie’s prom, only the band is playing on even as pig’s blood rains down and the banners are on fire.

The Stones had one other advantage in recovering from Altamont that Scott won’t enjoy: the weird fetishism of that show as some kind of supernatural event. The legend that the Stones were playing “Sympathy for the Devil” when the stabbing happened — they weren’t — kind of let the band off the hook, for the superstitiously inclined (After all, it wasn’t you and me… it was Satan.) That it came months after the then-unsolved Manson Family murders in the southern part of the state also contributed to the darkness of that fateful day.

Looking at Scott’s set list, this is just going to be a tougher tragedy for anyone to romanticize, unless you want to look at fans desperately searching for a way out of the surge as he performed “Escape Plan” as some kind of cosmic synchronicity. What we really learned from Astroworld is that it doesn’t take the devil to turn a concert deadly; given a little laxness or incitement, it could be your fellow fans. And for the time being, that’s a nightmare that he’s the face of.