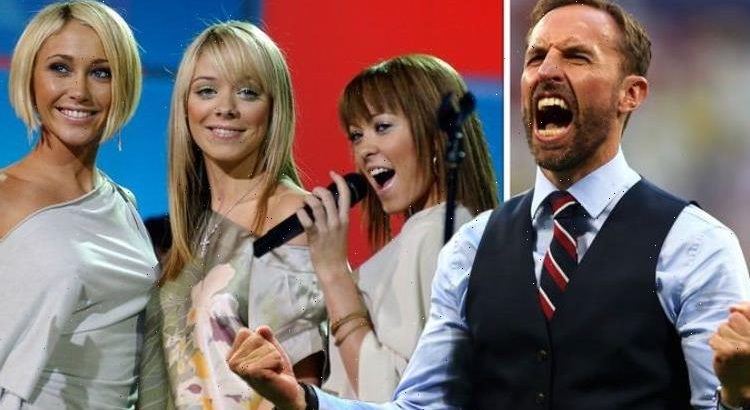 Throughout the Euros 2020 the heart of the nation has been behind Gareth Southgate and his team in the hopes that he will be bringing football home for the first time since 1966. Southgate’s namesake has since been adopted by Atomic Kitten fans who inserted his name into their smash hit Whole Again.

This week Atomic Kitten reunited on Heart’s Breakfast Show for the first time in 15 years to perform the song live.

Liz McClarnon, Jenny Frost and Natasha Hamilton sat in the studio beside Amanda Holden and Jamie Theakston to belt out their track.

SCROLL DOWN TO WATCH the video of the iconic ’90s pop band crooning: “Southgate you’re the one / you still turn me on / football’s coming home again.”

The band spoke candidly about getting back together to perform the incredible song.

Liz Jenny and Natasha told Jamie and Amanda this is the first time they have been working together in 15 years.

Jenny left the band in 2008 when the group disbanded.

She missed her chance to make a return in 2012 when she was pregnant.

Instead, she was replaced by Kerry Katona.

Jenny later told Capital Breakfast she got a call on Monday to re-record Whole Again with the new lyrics.

With just 30-minutes notice, she made her way to the recording studio.

The star, who was in Ibiza at the time when she got the news, recalled: “I had a hangover and I was on the beach and I was like ‘what?’

“I seriously went into the studio and I was like: ‘I’m really sorry, I’m covered in sand.'”

Despite her sandy appearance, Jenny went on: They [said]: ‘Can you take your shoes off?'”

Host of Capital Breakfast, Roman Kemp, told the band it was his “boyhood dream” to see them sing the song along with listeners on the radio.

The band has notoriously split up multiple times over the past two decades.

Jenny only returned to the band this month, following the fervour surrounding Whole Again’s revitalisation.

The Southgate single is expected to be released in time for the Euros 2020 final this weekend.

Tune into Heart Breakfast with Jamie Theakston & Amanda Holden, weekdays from 6:30am – 10am