The biggest surprise of this night was when Bananarama shimmied out…and there were only two of them. 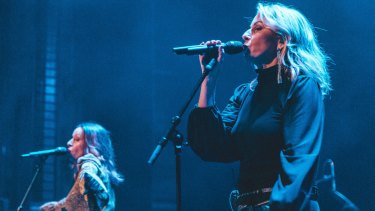 Bananarama are down to two members now – but that didn’t seem to matter.Credit:Rick Clifford

The image of Sara Dallin, Siobahn Fahey and Keren Woodward, all shaking it at the "silver flame" in the music video for Venus, is an icon of the 1980s. Alas, Bananarama is one girl group that no longer comes in a bunch of three, Fahey having left in 1988 and again after a short reunion tour last year.

Not that it mattered too much to the sound this night. The vocal blend on the London band's run of hits, mostly produced by '80s svengalis Stock Aitken and Waterman (SAW), was usually the girls simply singing in unison. Judging by the crowd's reaction as Dallin and Woodward launched into opener I Heard A Rumour, they were close enough to the real thing.

The dance moves haven't changed much either. The choo-choo train, the up-and-down flailing arms, that one where they wiped a peace sign over their foreheads – after nearly four decades together, Dallin and Woodward did them all in (mostly) perfect sync.

Shame that they mumbled through a lot of their between-song banter, though, wasting time replying to obscure requests that this slick show couldn't accommodate.

The setlist wasn't completely predictable. Love, Truth And Honesty, recorded after the Fahey heyday, sounded like a lost Motown classic: its four-to-the-floor drums, busy bass, Supremes-style harmonies and bright synthesised keyboards lifted the room early, and held its own against the actual Supremes song (Nathan Jones) they covered later.

Robert De Niro's Waiting gained from its tempo being turned up a notch, while I Can't Help It surfed along on enough wakka-wakka 1980's "soul" guitar to make Spandau Ballet blush.

Even the material from this century didn't prompt an exodus to the bar, as Move In My Direction and Dance Music stuck to the strong hooks, big beats and insistent lyrics of the Bananarama template.

But the big SAW hits were what we came for, and happily their dated 'hi-NRG' arrangements sounded much fresher for being played by this band – even if the four gentlemen looked to be giving as much discretionary effort as they might do in renewing their car insurance.

I Want You Back and Love In The First Degree sparkled. One could hear why Dallin said she'd need "a breather" before singing them back-to-back – like everything else about them, the vocal melodies on these earworms were pitched right up.

Inevitably, Venus sent this crowd of mostly 40-somethings into an even more frenzied state. Then majestic closer Na Na Hey Hey Kiss Him Goodbye showed why even two-thirds of Bananarama is enough to make the classic girl group sound endure.