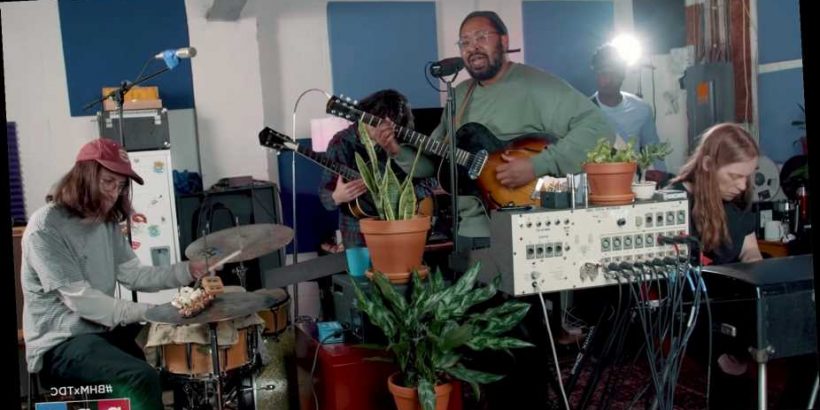 Bartees Strange and his band performed an NPR Tiny Desk concert in the basement of his studio in Falls Church, Virginia — not too far from both his and NPR’s home base in Washington, D.C.

The indie artist played several songs from his debut album Live Forever, released last year; in light of the intimate setting, Strange smoothed out the hardcore and emo-inspired rough edges of tracks like “Boomer” and “Mustang” into a sound more reminiscent of neo-soul.

Between songs, Strange took the time to shout out artists and music from the past year that he  enjoyed, including Yves Tumor’s Heaven to a Tortured Mind and the work of Aaron Dessner, who Strange called “the indie rock Michael Jordan.”

“The dude inspires all of us,” Strange said. “The work he did this year — the Taylor [Swift] records, Big Red Machine stuff, the National stuff…As a producer and a person who makes stuff, it’s so wildly inspiring to see someone work like that.”

Last month, Strange made his late-night television debut, performing “Boomer” on Late Night With Seth Meyers. Strange also joined Lorenzo Wolff on a cover of Judee Sill’s “The Pearl,” which will appear on the latter’s upcoming tribute album, Down Where the Valleys are Low: Another Otherworld for Judee Sill, out March 12th.