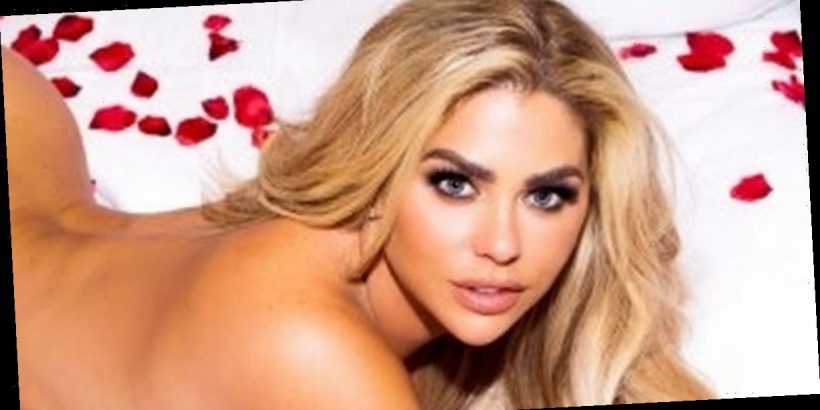 Bianca Gascoigne showed off her jaw-dropping figure as she stripped totally naked for a series of sultry Valentine's Day snaps in a bedroom.

The blonde bombshell, 34, smouldered for the camera as she lay on top of a white bed with no clothes, protecting her modesty with just red petals.

Bianca showed off a hint of side boob as her cleavage spilled out from under her in the sultry snap, whilst her arm helped cover up her assets.

Meanwhile, her peachy bum stole the show as she arched her derriere into the air, crossing over her toned legs as she rested them on white pillows.

Bianca finished the look off with a full face of make-up, adding false eyelashes to her lids and a slick of lipstick to her pout.

Letting her blonde hair fall over her shoulders into sleek waves, Bianca looked seriously glamorous as she stripped off for the eye-popping pictures.

Bianca is expected to celebrate Valentine's Day with her boyfriend Kris Boyson, who she has been dating since last year.

The pair have gone from strength to strength with their romance, as Katie Price's ex has hinted they could be getting engaged sooner rather than later.

Talking on FUBAR Radio last month, Kris teased their marriage plans to Bobby Norris and Stephen Leng, saying: "I don’t want to say too much about that sort of thing.

"Maybe I’ll be back on here [FUBAR Radio] in a few months and the story will be different.'

"But, like, yeah, she’s a great girl and I’ve always wanted kids and wanted marriage and stuff like that. So, you never know what will happen."

Discussing their romance, which saw them move in together after just one date, Kris said: "She’s great, I mean she’s an absolute diamond.

He added about Bianca: "She’s so supportive, she appreciates what I’m doing for work and she really helps out with it. It’s nice to have someone that’s nice and supportive and understands what you do."