The 73-year-old rock legend has been hit by a series of serious issues over the past year. In 2019 he shocked fans posting an image from hospital after he had an operation on his calf muscle to relieve serious pain in his Achilles tendon which was causing a problem on stage during Queen and Adam Lambert’s current world tour. But then this year, three major incidents left him with heart, stomach and back problems. Nobody had realised quite how dangerous and life-threatening it was until Brian opened up in a new interview this weekend.

Brian was promoting the upcoming release of Live Around The World, the new Queen and Adam Lambert album and film which collects the band’s favourite concert performances from over the last eight years.

Brian, Adam and Rogert Taylor spoke about how the current pandemic crisis has affected the tour and also their own lives.

The Queen guitarist opened up on his own extreme personal challenges this year that “nearly killed me.” 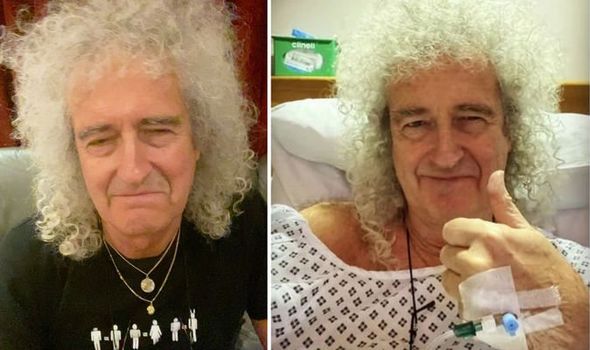 Hmm … Sheer Heart Attack eh ? Well, I think I always worried a little bit about that album title. I wondered if it might upset some people who had actually had heart attacks. I’m actually quite relieved now that I’m in that club – and I don’t find it upsetting at all ! Take. care folks. And … why did those discs in my spine get so squished? Well I think 50 years of running around with a guitar strap over my left shoulder holding a heavy guitar might have something to do with it ! But it probably WAS all worth it ! Bri

Brian said: “I’ve had complications due to the drugs I’m on, one of which was a stomach explosion that nearly killed me.”

“The heart attack was a symbol of an arterial disease, but I don’t drink, I don’t smoke, I don’t have high cholesterol and I was exercising throughout the tour, so why did it happen?”

May revealed his heart attack drama back in May which required three stents and a heavy regimen of drugs.

But nobody had known the medication also caused a life-threatening “explosion.”

HOW IS BORIS JOHNSON HANDLING THE CORONAVIRUS? VOTE IN OUR POLL

Reality check ! For me. No – the Virus didn’t get me yet – thank God. Hope you’re all keeping extra-safe out there. A decision to relax controls doesn’t suddenly make the danger go away. But me ?? Yes, I’ve been quiet. Reason ? As well as getting over-stretched and harassed by too many demands … I managed to rip my Gluteus Maximus to shreds in a moment of over-enthusiastic gardening. So suddenly I find myself in a hospital getting scanned to find out exactly how much I’ve actually damaged myself. Turns out I did a thorough job – this is a couple of days ago – and I won’t be able to walk for a while … or sleep, without a lot of assistance, because the pain is relentless. So, folks … I need to go dark for a while, getting some complete rest, at home. Please, please don’t send me sympathy – I just need some healing silence for a while. I’ll be back – but I need the complete break. OK ? Thanks. Take care out there. Bri

Brian, though, has always looked for the positives whatever adversity he faces and reassured his fans through every step.

In the new interview, he adds: “At least now I have a heart that is working far better than it was.”

My first walk in the park since this all began. My … the air feels good ! Sky is blue – sun is clear and bright and warm and the breeze is cool. White fluffy cloud scud over my head. But I’m dependent on these ‘crutch’ devices to get around. There’s always ONE snag !! Well, not for long, hopefully. I’ve been through these scrapes plenty of times before. They make you stronger, right ?! If they don’t kill ya !! Well, I’m not planning to check out just yet !!! Rock on out there !! Isolate !!! Photo by Phil Webb, who bought me an ice cream – Thanks Phil – lovely day !!! Bri