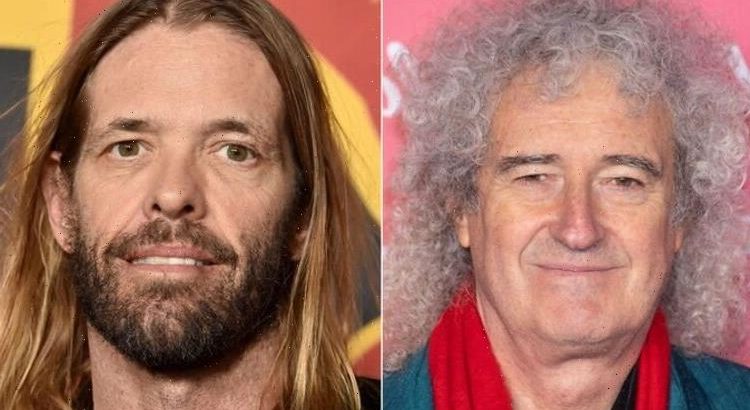 Hawkins had a lifelong connection with Queen. As well as often speaking about the band’s influence on his career, he also worked directly with them, especially May. The drummer actually played on the track Cyborg, an early recording from May’s Another World album. This was while he was still working with Alanis Morissette before he joined Foo Fighters in 1997. The Queen guitarist has movingly described in a new interview how that early bond continued through the decades until the last week of Hawkins’ life.

May described how he has struggled with the untimely death, comparing it to losing George Michael.

The Queen icon also talked about their early and instant connection and Hwakins’ ongoing friendship with himself and Queen’s drummer Roger Taylor.

May described their earliest encounter when Hawkins was on tour with Morissette in London: “We instantly bonded, Taylor became very close to Roger and Roger’s son, Rufus, who very much follows in Taylor’s footsteps — he’s a wonderful drummer.”

From then on, May said he followed the young musician’s career closely: “I saw the Foo Fighters from those very early small gigs. I think I saw them at Brixton Academy first and they were wonderful — just full of exuberance.”

And when Hawkins himself became famous, he returned the love in public, even declaring that Queen’s Keep Yourself Alive was the track that inspired him to become a drummer.

May said Hawkins was “the best publicist for Queen ever, he’s been so good for our image! Where he kind of regarded us as cool — which at the time a lot of people didn’t.”

Hawkins even performed the Queen classic with Foo Fighters at Lollapalooza Argentina, days before he died. He came out from his kit to take lead vocals while Dave Grohl handled the drums. Along with the band’s guitarist Pat Smear, he was an unabashed Queen fan.

May added: “We instantly bonded because Taylor and Pat Smear were the most informed Queen fans, they knew more about us than we did. We were just shocked to find out how much they felt about us.”