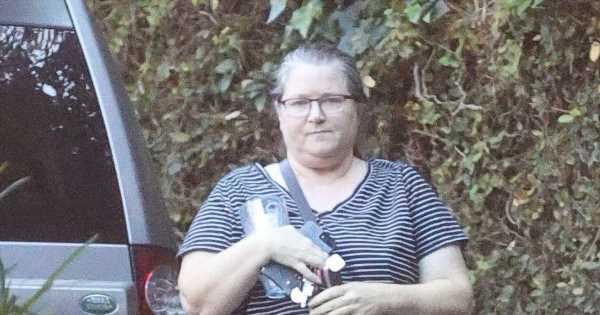 Hollywood actress Bridget Fonda was spotted out and about in a rare public sighting.

The 58 year old, who stepped out of the spotlight, was snapped running errands in Los Angeles on Wednesday.

Bridget was last photographed back in 2009 when she attended the LA premiere of Quentin Tarantino's World War II epic Inglorious B*****ds with husband Danny Elfman, 68.

The star retired from acting in 2002 after featuring in many critically-acclaimed films such as Tarantino's 1997 film Jackie Brown and the thriller Single White Female.

The film star decided to step out of the spotlight to focus on family life at her ranch in Santa Barbara.

Bridget is part of Hollywood's famed Fonda Dynasty, along with her grandfather Henry, father Peter, and aunt Jane.

On Wednesday, she was captured driving her 17-year-old son Oliver around LA in her silver luxury Land Rover.

Her once golden blonde hair was now styled into a casual low ponytail.

The star wore a black and white striped T-shirt and jogging bottoms, with a black bag across her shoulders.

On her feet, she wore a pair of New Balance black and grey trainers.

She was also seen wearing black-framed glasses on her natural makeup-free face.

The shy star appeared to keep her head down while walking past the paparazzi and her face was covered with a mask.

The actress had a sparkling career and she managed to get some great films under her belt.

Bridget's breakthrough role came as she played the journalist in The Godfather Part III, which was released in late 1990.

In 1997, she strangely happened to be on the same flight as legendary director Quentin Tarantino who after meeting her offered her the part of Melanie in Jackie Brown.

Bridget's final major acting role was Kiss of the Dragon in 2001.