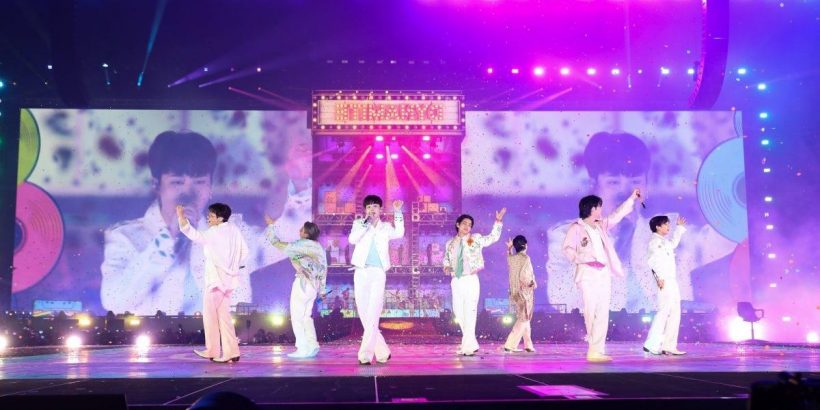 A new BTS era is upon us. Following the completion of their Permission to Dance On Stage tour, BTS announced their next album will be released on June 10 with a video teaser. Not much more is known about the album besides the release date. However, the video teaser for the new album includes the tagline “WE ARE BULLETPROOF” and took fans through BTS’ past eras.

BTS released a teaser for their new album

On April 8, April 9, April 15, and April 16, BTS put on Permission to Dance On Stage – Las Vegas concerts at Allegiant Stadium.

The final concert in Las Vegas marked the end of BTS’ Permission to Dance On Stage tour and “Permission to Dance” era. At the end of the concert, a video presentation was shown to concertgoers as a surprise. The teaser was then shared on Big Hit Music’s official Twitter account for BTS.

BTS’ teaser for their new album opens with the band’s official logo. The teaser then presents a series of black-and-white clips, showing scenes from BTS music videos from their debut until “Permission to Dance,” their newest release.

After the teaser for BTS’ new album was released, Big Hit Music confirmed the comeback for fans in a new Weverse announcement.

This is BIGHIT MUSIC.

Details on the new album will be provided in a separate notice at a later date.

We look forward to your love and support for BTS’ new album.

BTS fans have theories about the album

Because little is known about BTS’ upcoming album so far, there is room for speculation about what it will entail. Following the announcement of the album’s release date, BTS fans began theorizing about the album on social media.

Some fans speculated that BTS will explore more of a hip-hop sound on the album as a way to honor the music from early in their discography.

“Now if this album is going back to their old hip hop and r&b roots…,” one fan speculated on Reddit.

“Does this mean Hip-Hop Bangtan might be returning!? The teaser seemed a bit edgy similar to their earlier albums…,” another fan wrote on Reddit.

Other fans theorized BTS’ upcoming album will honor their entire discography and history as a group, as the release date falls close to the septet’s debut date.

One Reddit user wrote, “AN ODE TO THEIR DEBUT ERA ???? and right before bts’ birthday?”

“3 days before their anniversary, comeback within a festa, and jamsil stadium being reserved from june 10th to the 15th?? comeback. festa. muster. this comeback is about to be huge…,” wrote a fan on Reddit.