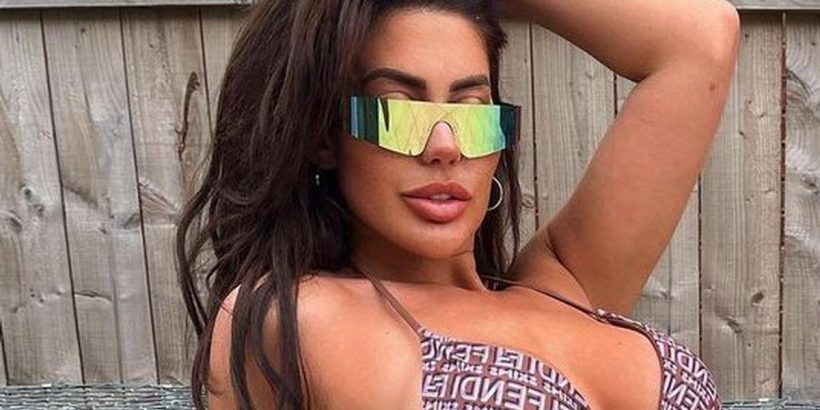 Geordie Shore star and Celebrity Big Brother contestant Chloe Ferry, 26, has lit up Instagram in a new post showing off her curves and her new tiger tattoo while she posed in a Fendi bikini.

Chloe's fans couldn't contain their excitement after seeing their "queen" all glammed up, showing off her toned and tanned body with one fan commenting: "Queen of the Gram!"

Chloe posed for two photos of her in the designer bikini, the first showed her perching on a bench with her legs crossed, and running her hand through her long brunette hair.

She was sporting a pair of sunglasses that hid her eyes slightly, adding a bit of mystery to the look.

Fans were treated to not just one, but two photos of the star looking fabulous and in the second photo, Chloe appeared relaxed while lying flat on her stomach and looking back towards the camera.

Eagle-eyed fans noticed some tan lines under her bum with one fan showing solidarity commenting: "I get those tan lines too hahaha."

One fan took to the comments to say: "Do you even have a big a**e if you don't have tan lines under your cheeks."

"Regret a lot of things in life but Fendi is not one of them," Chloe captioned the post.

Chloe is no stranger to going under the knife and in 2020 she had the cosmetic procedure Brazilian bum lift to make her bum look bigger.

She has admitted to spending over £50,000 on surgery, over the years – and she doesn’t plan to stop any time soon.

Since her rise to fame in 2015, Chloe has undergone a series of procedures – including two nose jobs, boob implants and regular fillers.

Chloe has also had veneers, tattooed eyebrows as well as dermal cheek fillers, and liposuction on her thighs and stomach.