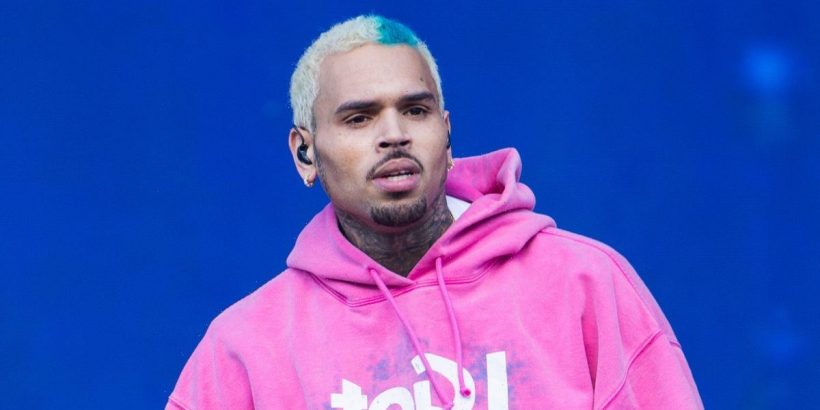 Chris Brown returned to the UK for the first time in 12 years since he was banned from entering the country more than a decade ago.

The 33-year-old rapper was confirmed as one of the headline acts at the star-studded Wireless festival last month and performed on the main stage in London at Crystal Palace Park on Friday (July 1).

It comes more than 10 years after the musician was reportedly banned from the United Kingdom back in 2010 after assaulting his then ex-girlfriend Rihanna, who required hospital treatment.

The artist put on an animated display as he took to the stage to perform a slew of his chart-topping hits for the excited audience in a pink hoodie with the words ‘I got lucky’ stamped across in a bright white font.

He teamed the jumper with a pair of light wash ripped denim jeans and crisp white trainers which he accessorised with an oversized designer watch and sported a peroxide blonde buzzcut that featured a bright blue streak.

Fans soon flocked to Twitter to share their mixed thoughts on his return to the country after the alleged assault took place at a Grammys party back in 2009.

One user penned: “Not Wireless bragging on their TikTok that Rihanna turned up. You guys had Chris Brown playing are you not ashamed?”

Another agreed: “If you’re planning on watching Chris Brown at wireless you may as well just say you hate women with your chest,

“All up in arms about Amber Heard but will happily support an abuser as long as he makes mediocre music and said sorry.”

A third vented: “I’m actually fuming that Chris Brown has been announced for Wireless, the man is an ABUSER, how has he been allowed to continue on this level?”

Others, however, were happy to see the star return to the country after more than a decade as they celebrated his music at the festival.

One fan of the artist wrote: “Chris Brown back in the UK after 12 years performing at Wireless festival, my baby was so happy, I'm so proud of him.”

Another chimed in with: “Btw. Chris Brown absolutely stole the show at Wireless today. Made ASAP look TIRED.”

The pop star’s Wireless show comes more than a decade from when he allegedly assaulted his then-girlfriend, Rihanna at a Grammys party back in 2009.

Chris pleaded not guilty in April 2009 to one count of assault and one count of making criminal threats stemming from the incident taking place on 8th February 2009.

He later pleaded guilty to the felony and accepted a plea on June 22, 2009, and was sentenced to 5 years of probation in addition to community service and domestic violence counselling.

He later shared a video with fans, accepting "full responsibility" and pleaded for forgiveness from his "deepest regret".

At the time of his ban in 2010, the Home Office said: "We reserve the right to refuse entry to the UK to anyone guilty of a serious criminal offence.

"Public safety is one of our primary concerns."