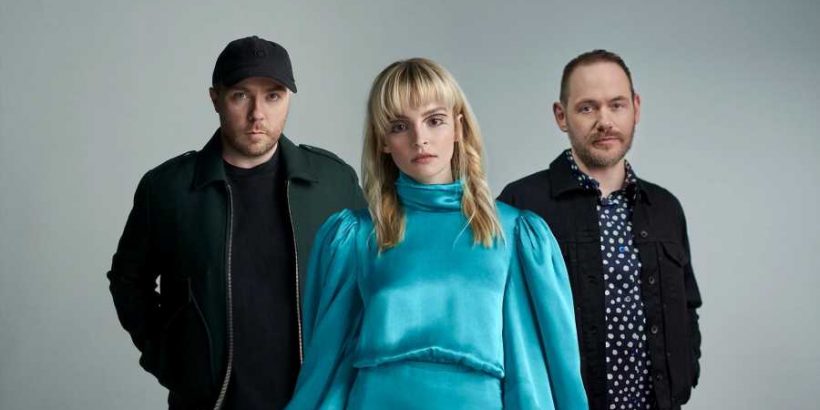 In some ways, a horror-themed album seems like the farthest thing you might expect from the Glasgow band Chvrches, known for iridescent synths and lead singer Lauren Mayberry ’s practically elfin, perennially chipper voice. But on their fourth LP, Screen Violence, Mayberry and band members Iain Cook and Martin Doherty pack the stifling anxieties and roving fears of the Internet age into earnest choruses and multi-textured songs, offering a project that swings from tinselly to tense as they try their best to expand their maximalist sound,

A change in tone isn’t surprising for Chvrches given the last couple of years. After the bigger, bolder sounds of their 2018 album Love Is Dead, the band seemed to achieve some of their mainstream ambitions with the Marshmello-produced “Here With Me.” The soaring dance hit brought them a double-edged wave of attention, specifically after the band called out Marshmello on Instagram just weeks after the song’s release for working with serial abuser Chris Brown and Tyga, who has repeatedly engaged with underaged girls. The message was met with the worst of the Internet, including a deluge of death and rape threats targeting Mayberry in particular. Then came the pandemic, which left everyone with fewer ways to connect and more time to plunge into digital despair. Like most of the world, Chvrches sounds like they’ve been going through it.

The band has always braided a healthy dose of cynicism into their anthemic synth-pop, but the lyrics on Screen Violence find them at their most angsty and agitated. They take inspiration from horror films and examine the misogyny lurking in the genre, drawing parallels between the way women are treated both onscreen and off. Mayberry lambasts patterns of gaslighting and emotional abuse on “He Said She Said,” where she repeats “I feel like I’m losing my mind” like a dizzying, desperate mantra. On “Final Girl,” she likens herself to the character who stays alive until the end of a slasher flick while wondering if it’s even worth trying to survive the industry. (“I should quit, maybe go get married/Only time will tell/And I wonder if I should’ve changed my accent/Tried to make myself more attractive,” she sings.) The darkness peaks when a brooding Robert Smith joins her on “How Not To Drown,” one of Chvrches more intense songs, inspired by a period of depression Doherty experienced that almost led him to quit the band. At times, they’re ready to just let everything burn down: “Lullabies don’t comfort me, so televise the great disaster,” Mayberry sings on “Lullabies.” “We’re better off inside of the screen sometimes.”

But while bleaker themes course through on some parts of the album, this is a band that can’t escape its own ebullience elsewhere. “Violent Delights” starts promisingly with haunted, faraway vocals, but eventually erupts into a sunburst of a chorus that feels like more of the same Chvrches signature. Some of the punch of “He Said She Said” is lost once it’s followed up with the springy “California.” The luster of the production can teeter on grating, undercutting the depth accomplished when their experiments enter new territory. Still, Screen Violence represents an enhanced version of Chvrches and although it might not be the most radical evolution, the album marks an intriguing step forward nonetheless.