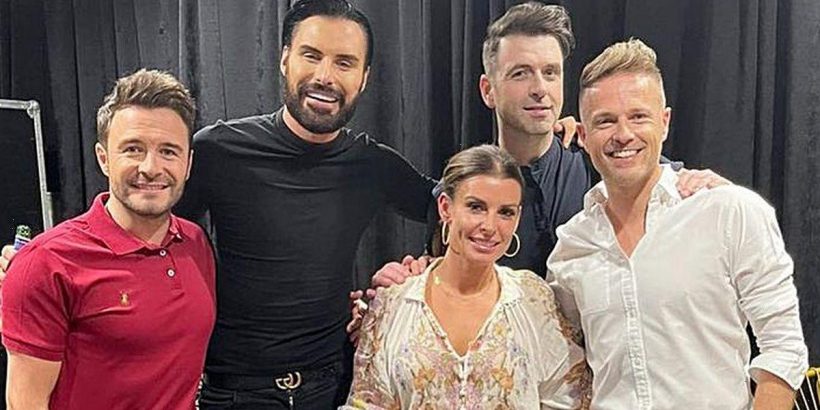 Coleen Rooney looked full of contentment as she stepped out with Big Brother legend Rylan Clark for a star-studded gig in the capital.

After a gruelling court case with ex-pal Rebekah Vardy, Coleen enjoyed a stress-free night as she celebrated her win while surrounded by famous faces and close pals when they attended a star-studded Westlife gig.

Coleen, who married Wayne Rooney in 2008, and pal Rylan attended Westlife’s London gig and enjoyed the music-filled night with a host of other famous faces.

The WAG and her Celebrity Big Brother star pal even managed to go backstage to meet the dreamy Irish hunks – which was a sure-fire way to top off their fun-filled evening.

Looking fresh-faced while backstage, Coleen smiled alongside the band of heartthrobs and her pal Rylan.

Donning a chic playsuit adorned with a floral print, Coleen paired the outfit with some flat sandals, a glowy makeup look and her hair in a very chic up-do.

In another snap, while enjoying the show, Coleen posed up a storm while beaming for a snap with a group of concertgoers, while Rylan flashed the peace sign.

The fun-filled night out at the Westlife concert comes after Wayne Rooney's wife Coleen had won the High Court libel trial against Vardy on Friday, July 29.

Vardy will now be hit with an estimated bill of £3 million to cover both WAGs' legal costs after a judge said her evidence at times "evasive or implausible".

Two-and-a-half years after Rooney made the bombshell claims about Vardy, the court found that Vardy, along with her agent Caroline Watt, were involved in the distribution of Rooney's private information.

To win the case Rooney needed to prove her statement, which famously ended with her stating the person behind the leaks was "………Rebekah Vardy's account", was substantially true and in the public interest.

She failed to prove that it was in the public interest but successfully proved that it was substantially true.