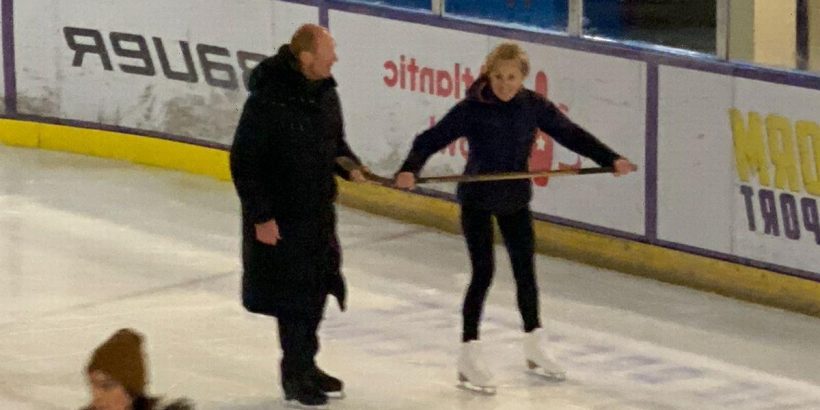 The actress who is best known to fans for playing Sally Metcalfe in the long-running soap was spotted with professional figure skater Stephen Pickavance on an ice rink.

In photos obtained by The Sunday Mirror, Sally could be seen wearing a puffer jacket as she brushed up on her skating moves while using an ice hockey stick during her practice session.

Meanwhile, in another snap, Sally and Stephen were pictured walking alongside each other.

Sally, who is also the mother of Bridgerton actress Phoebe Dynevor, had the rumour mill in overdrive this week as some questioned whether she would be appearing on the show.

But now it looks like preparation for the dancing programme is certainly underway and the Corrie star is bound to be a part of the celeb lineup.

Discussing her appearance on the show with The Sun, a TV insider said: "ITV have been keen to get Sally on the ice for a number of years and she has tried out in the past, but they haven’t been able to make it work.

"Sally is one of Corrie’s best-loved stars, her daughter Phoebe is also now a household name so the timing couldn’t be better."

According to reports, the soap star is committed to her training and is making sure she squeezes in a minimum of one session at the ice rink each week, which is usually on Sundays.

Sally, 58, isn't the first Corrie star to partake in the ice-skating competition, as co-stars Faye Brookes, Samia Longchambon and Lisa George have all taken part in the iconic show over the years.

Actress Samia also found love on the dancing show in 2013 with her husband Sylvain Longchambon.

Since appearing on the cobbles in 1986, Sally has become a much-loved character and has been involved in numerous hard-hitting storylines.

Earlier this year, to honour her 35-year contribution to the iconic soap, the Middleton-born actress was awarded an MBE in the New Year Honours for her impeccable service to drama.