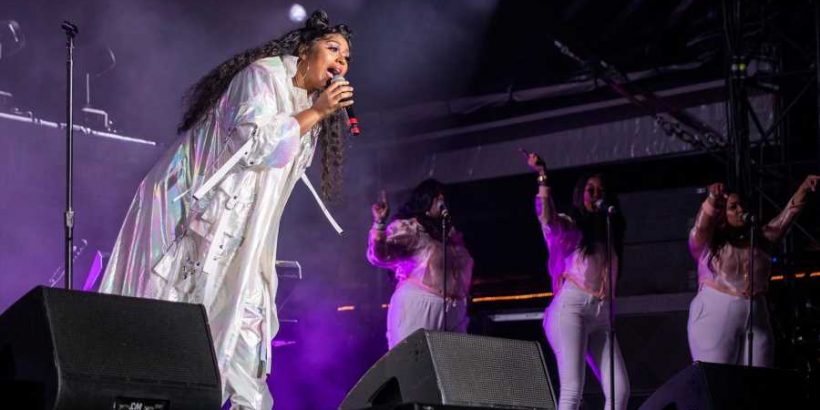 In 2019, Joey and Persephone, both avid Travis Scott fans, traveled from their home in Fresno to Las Vegas in the hopes of catching the star performing at the Day N Vegas festival. Unfortunately for them, Scott, who is known for his frenzied, full-throttle live shows, hurt his knee while playing at Rolling Loud that year. He didn’t recover in time for Day N Vegas, and he had to pull out of the event.

Joey, 29, and Persephone, 28, returned to the festival this year again in the hopes of catching Scott. “He’s the main reason why we came both times,” Persephone says. But the “Sicko Mode” star didn’t show up yet again — this time because his Astroworld festival in Houston turned into a deadly disaster earlier this month, leaving at least nine young fans dead and many more injured.

Las Vegas Police 'Adjust' Day N Vegas Plans After Astroworld Tragedy: 'We Don't Want a Repeat of That in Our City'

Scott’s absence — Post Malone replaced him on Saturday night — and the recent Astroworld tragedy were top of mind for more than a dozen fans interviewed by Rolling Stone as they wandered through Day N Vegas’ three stages and more than 100 performances this weekend.

“My friends were worried that the same thing would happen at this festival that happened at Astroworld,” acknowledges Jacob, a Las Vegas native who recently turned 26. “It’s tough for people who enjoy going to these concerts — it’s hard not to be second-hand traumatized by it.”

Chris, age 30, came to Day N Vegas from Sacramento, where he works in the ticketing industry. “Over at the Golden 1 arena, they just had Harry Styles [perform],” he says. “I was asking our head of security, what are our new procedures? If anything gets rowdy, are we ready to cut off power and shut everything down for the safety of the fans?”

Abhy, 25, in town from San Francisco for her first festival, admits to being “a little worried — especially as the night goes on and people migrate to the headliners and the crowd gets bigger.”

“I feel collectively that everyone is a little spooked,” adds Elanie, 26, who was in town from L.A. taking photographs throughout Day N Vegas.

“Everyone” included festival organizers as well as fans. Between sets, the mega-screens on the sides of the stages flashed with reassuring messages (“Your safety is our primary priority”), safety tips (“Take note of emergency exits”), and crowd control instructions (“Please take a few steps back to give our festival-goers up front some room”).

When a man collapsed in the VIP section during Victoria Monét’s set — which was otherwise full of joyful dancing and springy funk songs enacting all shades of seduction — fans reacted quickly, running for guards and waving lit-up phones. Security was by the man’s side in roughly 10 seconds, pulling him up and heading towards the medical tent.

Most festival-goers said they were pleased with the security presence at Day N Vegas. “I feel like they’re prepared because they are aware, which makes me feel a lot better,” says Kat, 27, in town from Maryland. “At any moment I can run 20 steps and grab someone if I need something.” (The only complaint about security came from Candida, 25, who felt that personnel weren’t closely scrutinizing attendees’ vaccination credentials.)

Artists at Day N Vegas were mostly scrupulous as they walked a tightrope, wanting to get the crowd going — what else is a live show for? — but also making sure they weren’t putting anyone in harm’s way. Several performers delivered what felt like veiled references to the Houston tragedy, even if they never explicitly mentioned it by name. “I gotta be safe tonight,” one member of the Flatbush Zombies told the audience on Friday. “I want to be reckless and do backflips in the crowd, but that’s not allowed any more.”

Freddie Gibbs struck a similar note during his cheerfully truculent performance on Saturday afternoon. His gravelly verse from Benny the Butcher’s “One Way Flight” and his own “Something to Rap About” landed with the force of a bulldozer bursting into a bowling alley; unsurprisingly, fans started to jostle and mosh near the front of the center stage, reveling in the pugnacious energy.

But Gibbs intervened, adamant that nothing should get out of hand. “I’m gonna calm you [people] down,” he told the crowd, flashing his winning smile. “I don’t want the police taking me to jail. Don’t hit nobody, don’t push up on nobody.”

Not everyone was drinking that Kool-Aid. Lil Uzi Vert took the stage around 30 minutes late on Sunday and seemed lost in his own livewire frequency. “Don’t stop my rage!” he shouted at one point. Near the end of his allotted set time, for whatever reason, his audio was cut off, causing the frustrated rapper to hurl his microphone deep into the crowd.

More common was the sentiment expressed by the R&B singer Sir on Sunday. “Let’s take care of each other,” he declared. “Shouldn’t be none of this ‘let people fall.’” Snoh Aalegra also checked in on a listener — “You good? We want everybody to be good” — during an exquisitely wrenching set the same day. Don Toliver asked fans for a moment of silence.

Bia seemed to sum up the tricky situation facing those on stage during the late afternoon on Saturday: “We came to have a good, safe rage,” she announced during her jackhammering set.

Bia was among the women who were utterly dominant at Day N Vegas. She was knives out during “Seashell” — “Your baby daddy don’t tell you the truth/He eat my pussy when I’m in the booth” — and low-key but formidable during “Best on Earth,” which wraps a series of ecstatic come-ons in an ominous beat that takes cues from both Mobb Deep’s “Shook Ones, Part II” and the infamous squeaking-mattress sample.

That same sample also occurred during Monét’s set. She led the crowd through a belt-along version of Trillville’s classic “Some Cut” — the sample is actually from a chair, despite being widely used to signify hyperactive springs in the bedroom — before segueing into “Dive,” a bouncy appraisal of a potential partner’s skills beneath the sheets. Monét also swaggered through the bass-popping, flirty funk of “Moment,” and channeled the glorious strut of mid-Nineties hip-hop soul to perfection on “Coastin,’” which feels like it belongs on that era’s R&B Mount Rushmore next to Groove Theory’s “Tell Me.”

As good as Monét was, no one could touch the singing of Jazmine Sullivan, who was typically stunning live, doing superhuman things with her voice while also blending gorgeous harmonies with her three backing vocalists. Rico Nasty was frenzied and ferocious — though she still made time to check in on a fan — as she shouted over bass lines like boulders and hi-hats that had the cold bite of winter sleet. Ari Lennox’s performance crested and receded and peaked again — waves of intricate neo-soul lapped prettily over the crowd. Doja Cat flexed old-school star power with a showcase full of charismatic, tightly coordinated slink and massive hooks. Mereba drew from shimmering bossa nova and glistening afrobeats during a whispery, enthralling set. Umi got one of the festival’s loudest sing-alongs with one of its softest tunes, “Remember Me,” a wistful ballad about a great love gone sour.

Among the festival-goers who spoke for this article, the luster of seeing a favorite act live — the chance to shout lyrics at Umi, or Rico Nasty, or Doja Cat — seemed to outweigh any post-Astroworld fears. (There’s selection bias, of course: Any people too concerned to attend a festival after Astroworld weren’t around to be interviewed.)

“It’s hard. We love music,” explains Käethe, 30. She says she was thinking about two tragedies — both Astroworld and the horrific mass shooting that took place at a country music event in Las Vegas in 2017 — as she walked into the Day N Vegas grounds. But, she decided, “we’re not gonna let that fear stop us from enjoying ourselves.”

Jacob echoed her words earlier that day. “You gotta brush [the fear] off,” he says, “and try to enjoy the festival for what it is.”