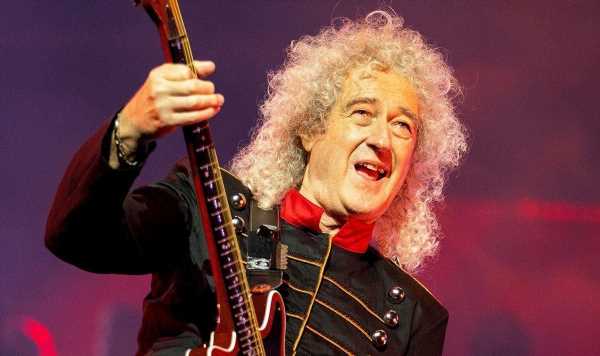 Queen and Adam Lambert opened the royal Platinum Jubilee Party last weekend in spectacular style. The guitarist traded his Diamond Jubilee perch atop Buckingham Place for an equally eye-popping  solo spot on the Victoria Monument. That would be impressive enough for most bands, but the music legends are also on the second leg of their interrupted world tour. Each show (and I’ve been and can attest to how spectacular it is) is over two hours of non-stop adrenalised action. Even with a couple of beautiful quieter moments, like the tradition Brian and crowd singalong with Freddie to Love Of My Life, it’s exhilaratingly exhausting just to watch. Now Brian has opened up about what it is like on the other side…

Queen and Adam Lambert restarted a huge tour that had been interrupted by the global pandemic in Belfast on May 27. Since then, they have already played eleven shows on the main tour, including five so far at London’s O2. Plus, of course, the Platinum Jubilee bash.

Brian himself will turn 75 next month on July 19. He will have a rare day off as their tour approaches its July 25th close in Finland.

Today he opened up in a typically candid post to his loyal followers about everything that he and the band are going through.

Brian wrote: “Thanks to all of you in the O2 Thursday night, packing it to the rafters and making it rock to its foundations !!!

“I’ve been silent since then – enjoying a blessed day of rest after performing effectively 8 shows in 9 days.

“After that, including the massive stress of the Jubilee love show, and a night of filming our own show, I can tell you most of my body hurts and there’s a kind of delirium sets in.

“Sometimes I’m looking at my fingers in the middle of a solo and wondering what they’re doing!”

Brian added: “But I’m reaching out for the exceptional moments – and my application to training over the last couple of years, while we were all denied live performance, has paid off.

“If I were 50 years younger this tour would still be an insane schedule – but right now? Well, we’re all totally on it! Ready to rock BIRMINGHAM !!! TONITE !!! Yeeeeeeay !!! Bri.”

The Queen icon has been cataloguing his journey on the latest tour, and thanked fans for sending in photographs, videos and artwork as he admitted: “Everything is flashing by so quickly in these fiery days, and I find it hard to reach out and catch anything.”