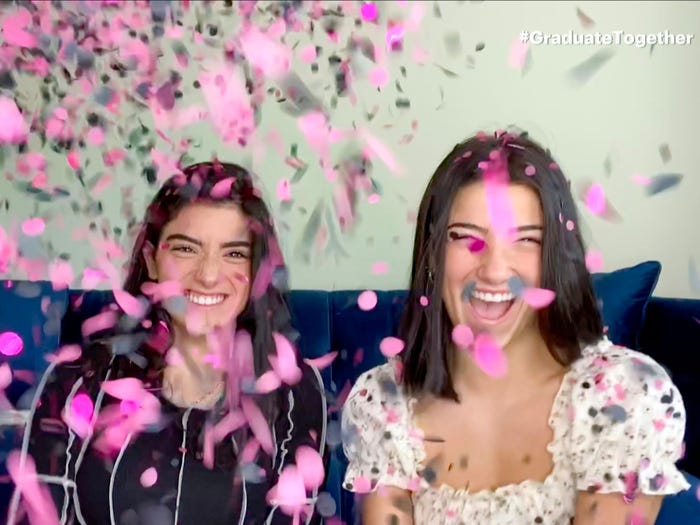 Singer and TikTok star Dixie D'Amelio ran to her sister's defense against controversial YouTuber Trisha Paytas with a TikTok on November 19. D'Amelio posted a TikTok where she was dancing to Paytas rapping the N-word in a cover of NWA's "F— The Police" in response to Paytas getting involved in the drama surrounding D'Amelio's sister Charli losing a million followers.

Charli, the world's biggest TikTok star, was creeping towards the 100 million follower milestone before a chaotic video was posted on her family's YouTube channel in which some said her complaint that she hadn't reached 100 million followers yet was "rude" and "entitled." Dixie was also criticized for her behavior and acting disgusted at the food a private chef made for them.

Paytas, who has a reputation for inserting herself into situations she's not involved in for attention, posted a series of negative TikToks about the sisters, criticizing their behavior, subsequent apologies, and explanations for the YouTube video. She also lashed out at James Charles — a friend of the D'Amelios who was a dinner guest in the YouTube video — in the process.

In response, D'Amelio posted a TikTok as a way to criticize Paytas back, reminding people she has freely used the N-word in the past. Paytas has a reputation for her controversial and oftentimes offensive actions and stunts.

"I couldn't find the sound for this dance so I chose a random one," she wrote in the caption with a smiling face emoji. "Hope that's okay!! Anyways let's get back to the RENEGADE!!"

D'Amelio then deleted the video.

"I DELETED THE VIDEO BECAUSE MY POINT THAT I WAS TRYING TO MAKE WAS PROVEN AND I DON'T NEED TO PROMOTE A RACIST SOUND," she said in a TikTok comment. "I made my point. It's done. It's over. And Charli is a queen. Goodnight."