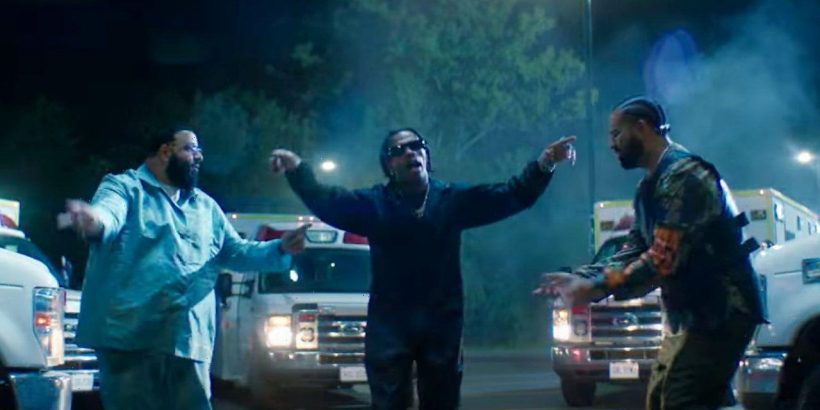 The track marks DJ Khaled’s first single from his upcoming album ‘God Did’, which is slated for an August 26 release and will feature collaborations from Kanye West and Jay-Z among others.

AceShowbiz –DJ Khaled‘s “Staying Alive” featuring Drake and Lil Baby is finally out. The new track arrived on Friday, August 5 along with its official music video that sees the trio working in a hospital.

The DJ/record executive opens the clip by speaking to medical students at the Khaled Khaled Hospital surgical residency program. Drake and Lil Baby, meanwhile, show up as “bad” doctors who are busy smoking and taking shots instead of taking care of their patients.

“I put my feelings aside, you want me to die? But baby, I’m stayin’ alive/ ‘Posed to be one of a kind, you puttin’ no miles, I thought you was down for the ride,” Lil Baby raps in his verse. “I’m tryna turn up her style, we goin’ Chanel, she get everything in her size/ She in some shit with another guy, I don’t even care, whenever I see you, you mine.”

“Staying Alive” marks DJ Khaled’s first single from his upcoming album “God Did”, which is slated for an August 26 release. When teasing the track and the new record on Instagram, he wrote, “DJ KHALED FEAT. @champagnepapi @lilbaby #STAYINGALIVE. ANTHEM AND VIDEO THIS FRIDAY AUG 5TH. #GODDID ALBUM DROPPING AUGUST 26TH 8/26 ! Win with us…or watch us win PRE-SAVE THE ALBUM NOW! LINK IN BIO!”

Serving as the follow-up to 2021’s “Khaled Khaled”, “God Did” will feature guest appearances from Kanye West, Future, 21 Savage, Lil Durk, Gunna and Quavo among others. He also confirmed that Jay-Z will also be featured in the project.