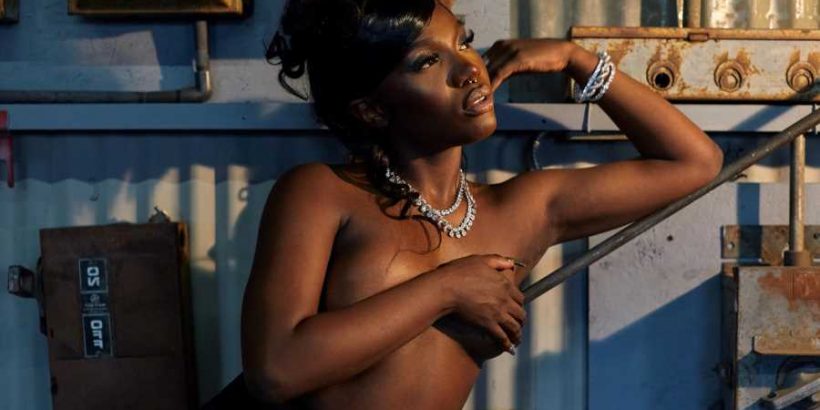 Working in the Carson, California, studio from which Top Dawg Entertainment was launched has become something of a rite of passage for new artists on the label. After building the studio in the back of his unassuming suburban home around 2004, founder Anthony “Top Dawg” Tiffith rounded up four of the most-talented MCs in the L.A. area — Kendrick Lamar, Jay Rock, ScHoolboy Q, and Ab-Soul — and brought out the best in them. Nearly two decades later, TDE’s first female rapper found herself in the wood-paneled, windowless cave known as the House of Pain. “Yes, child, they had me in that cold-ass studio,” says Doechii. “I was in that studio struggling, writing music, no heater.”

At that time, the studio looked like it might have back when Lamar was making good kid, m.A.A.d city a decade earlier. A shabby brown couch sat under a handwritten decree about what makes a rap star. Dark wooden figurines of old-timey Black musicians lined a shelf, and a paper notice from Top reading “DO NOT FUCK WITH THESE SETTINGS” hid what might or might not have been a thermostat. “No, man, I remember Carson,” she continues, growing playfully dramatic. “I don’t want to go back.”

Doechii, 23, caught the attention of multiple labels after her breakout hit, 2020’s keenly autobiographical “Yucky Blucky Fruitcake,” took off on TikTok — notably as a soundtrack to people showing who they once were and who they are now. “I didn’t predict that there would be people showing their weight transformations, or trans women and trans men showing their transitions, people showing their glow-ups,” Doechii told Rolling Stone last year.

She wasn’t interested in most of the labels that pursued her — “I knew I wasn’t going to sign with them. I just wanted the free studio time, and I wanted to travel,” she says — but when Top Dawg’s son Anthony “Moosa” Tiffith, now TDE’s president, got in touch, the alignment was almost immediate. Within two weeks of her first meeting with TDE in January 2021, she had moved to L.A., leaving most of her belongings back in Georgia with her mom. “Child, I left that stuff,” she recalls. “I got that check. It was over.”

As she has gained notoriety for her animated rap delivery, quirky narratives, gorgeous singing voice, and predilection for house beats, Doechii has been compared to successes like Nicki Minaj, Missy Elliott, and Azaelia Banks. While she appreciates the comparisons, she isn’t giving them much credence. “When I hear people compare, they’re internalizing and they’re processing and they’re digesting me,” she says. “It’s just like the first time the world got exposed to Lady Gaga. A lot of their comparisons lay with Madonna, because they [were] trying to make sense of what’s happening now based on what they’ve heard before.”

In conversation, as in her music, Doechii is at once serious and silly, slick and unhinged. She’s comfortable over all kinds of production, from celestial slow jams to eccentric rap beats to pulsing dance music. Nothing sounds out of place under her. This agility shines on her latest project, a five-song quickie called she/her/black bitch, matching the pronouns in her Twitter and Instagram bios. Doechii says she reclaimed the slur after it followed her around Tampa, Florida, where she grew up — from predominantly white schools to mostly Hispanic neighborhoods to primarily Black ones, those words were there, trying to degrade her. “I have embodied the slur ‘Black bitch’ and made a whole archetype out of it,” she says. “I see this Black girl, and she’s superpowerful, creative, confident. She knows who she is. She doesn’t carry around weight. She’s just a boss.”

She says each song on the EP uncovers a layer of this archetype: ​​On “Bitch I’m Nice,” released in July, Doechii flexes like a swaggy kingpin. On “Swamp Bitches,” accompanied by Rico Nasty at her best, Doechii is smart-assed and grimy, rapping a mean slow-strut of a verse before delivering a manic one over a beatswitch. On “Bitches Be,” she’s mellow and reflective. On “This Bitch Matters,” she sounds stripped bare, with an assured but sensitive sense of self.

Doechii has known the path she’s on since sixth grade. She recalls the epiphany that turned her from Jaylah Hickmon, the preteen who’d never lived in one place for long, to Doechii, the future superstar: “I realized what I wanted out of life, and when I realized it in that moment, I heard that name and wrote it down in my journal. I changed my MySpace name and all that other shit. I went to school the next day and I was like, ‘I’m Doechii.’ And that was it.”

As a teen, she got serious about dance, studying ballet, tap, contemporary, and gymnastics. She performed with a marching band. She started a vlog where she told elaborate and exaggerated stories about her life. Today, you can see her skills of movement and persona in videos like the nudity- and violence-laden one for her spring single, “Crazy,” which was age-restricted on YouTube.

In May, she gave an explosive performance of “Crazy” on The Tonight Show, along with her single “Persuasive” — a sensual ode to feeling yourself off the cannabis that stands in stark contrast to the “Yucky Blucky Fruitcake” lyric where Doechii talks about feeling anxious when she’s high. “I definitely smoked last night,” she says with a sly giggle. “Honestly, even though I get anxious, I will still smoke because eventually I’m going to chill out. By the end of the high, I’m just meditating and thinking and vibing and praying.”

Lately Doechii has been working around the clock on her full-length debut for TDE, among other projects, including sessions with Pharrell Williams and Babyface. “I’m never out of the studio,” she says. “And if I am out of the studio, I get hell about it.” She jokingly calls Moosa “Sergeant” — “The way that he pushes me and works me feels kind of like a bootcamp,” she says — but luckily, Doechii likes to work hard.

Constantly being in the studio means that her upcoming album has evolved over time as she makes and falls in love with new music. Right now, she wants the album to reflect four tarot cards that spoke to her as she discovered the practice around age 20. (“I was in my Tumblr, witchy aesthetic, Urban Outfitter bag,” she says. “Like, ‘Oh my God, I’m a hippie, whatever.’”) The cards that she’s building the album around are Death, the Devil, the Hermit, and the Star — all with an Afro-futurist bend. She explains that the video for “Crazy,” for example, was inspired by the nakedness, vulnerability, and confidence of the Star.

Doechii is mindful of her place on one of the most influential labels of the past decade. She’s grateful for the example set by SZA, with whom she’s toured, recorded, and become friends. “We got drunk together and we had a real moment,” she recalls of one moment near the end of their 2021 tour. “I don’t want to give too much personal information away, but I felt like we really connected over that tequila.”

Beyond that, she adds, “SZA really paved a way,” Doechii says. “SZA’s one of the most successful artists on TDE. It made my job easier. Now they know that not only can women sell, but really we bring the most money in.”

TDE has started to feel like a family to Doechii, where her vision and opinions are respected, even as some fans have speculated about internal tensions at the label (especially after the repeated public airings of grievances between SZA and TDE’s Terrence “Punch” Henderson over the timing of SZA’s second album). “The way that TDE operates is truly out of excellence,” Doechii says. “And sometimes it takes time to cook a good meal.”