When Glenn Frey died in 2016, his fellow Eagles founder Don Henley said the Californian rockers would not play again. 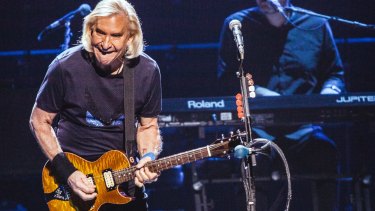 "It would just seem like greed or something," he told the Chicago Tribune at the time.

Nevertheless here the six of them are. Although with $400 tickets for this night's best seats, you might argue Henley was right about the greed bit.

Yet this show didn't feel like a cynical grab for cash. (Or more cash, given Their Greatest Hits 1971-75 is the biggest-selling album of all time).

That had a lot to do with the presence of Deacon Frey, Glenn's 25-year-old son, whose vocal and facial similarity to his father only added to the sense of a baton being passed.

And what songs they are, covering the waterfront of American music – blues, jazz, country, soul and even heavy metal, thanks to Joe Walsh whose shambling presence, marble-mouthed singing and impassioned electric guitar solos were among this night's few unpredictable elements.

Take it Easy remains a rare melody one never tires of hearing, and Deacon Frey refreshed it with youthful swagger early on, as he did later with its rewrite Already Gone.

Another inspired addition to the line-up was Vince Gill. A country star in his own right, Gill's soulful high tenor made showstoppers of Take it to the Limit, New Kid in Town and Heartache Tonight, which brought an otherwise sedentary crowd to its feet. His sprightly hit Don't Let Our Love Start Slippin' Away didn't deserve the exodus to the bar that greeted it, although to be fair it was played halfway through a show that Henley had already told us would be two-and-a-half hours long.

For a band with a fractious history, there was a sense of camaraderie on this night. Henley at one stage shared jokes and moved guitars in unison with Walsh and the other survivor from the 1970s, bassist Timothy B. Schmit, and their embrace after closer Best of My Love seemed heartfelt.

Another pointer to better relations was the Eagles started with Steve Young's Seven Bridges Road, the pre-show vocal warm-up from its earliest days, which had been abandoned amid the acrimony of the 1980 and 1994 break-ups.

The opening six-part harmony in that song was as spine-tingling a moment as you'll get from live music, and much credit for that and for all this night's faultless group singing must go to Schmit, who at 71 retains a choirboy tone to rival prime Art Garfunkel.

Henley's voice was in not quite as good shape, lacking cut-through in the upper register, although credit to the guy for doing most of his singing while playing the drums in his behind-the-beat style. And its unmistakeable, husky tone still brought the house down on piano ballad Desperado, a synthesiser-free Boys of Summer, and a Hotel California heralded by an unexpected, psychedelic trumpet solo.

No, the Eagles aren't the band they once were – but with superb sound quality, virtuosic playing and singing, and a back catalogue that's a masterclass of pop songwriting, they're still a reliably good night out.