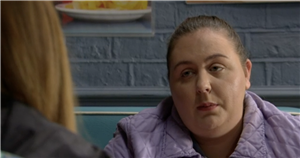 EastEnders star Clair Norris looked nearly unrecognisable from her soap counterpart Bernie Taylor as she glammed up for Thanksgiving.

The soap actress, 23, took to Instagram to share an incredibly glamorous snap with her 110,000 followers, donning a plush red jumper with huge sleeves for the occasion.

The woollen garment gathered up around Clair’s wrists and featured a loose turtleneck to keep her warm as she chilled out with a backdrop full of Christmas trees.

And the stunning top left her long-nailed manicure on full display as she clasped her hands together on the tabletop, showing off white-tipped nails.

Her sleek brunette tresses tumbled down past her shoulders, while Clair opted for a sultry make-up look of red lipstick and a dark smokey eye.

But the star wasn’t afraid to have fun, as she later posed playfully with a turkey-shaped hat pulled over her head and a huge grin on her face as she prepared to enjoy an American-style meal.

Her fans rushed to the comments section to show Clair some love, with one posting a long stream of red love-heart emojis in response to the cheeky post. "I want your jumper! Where did you get it?!" another begged, while a fourth fan penned: "You look absolutely beautiful as always."

And someone else added: "Lush jumper! Where’s that from?"

Fans were devastated to see Bernie leave Walford – and, since she was last seen on BBC screens, they won’t have seen much of her as she only sporadically updates her socials.

She’s taking a break from the soap and will return at a later date – but her exit storyline was embroiled in the usual Albert Square drama as she became suspicious that Rainie was using drugs again.

Bernie had agreed to be a surrogate for Rainie and Stuart, and was carrying their baby when she fled for good – despite Rainie’s drug test proving she was clean.

Speaking to DigitalSpy, Clair explained of the storyline: I think that Bernie is overwhelmed with everything and definitely needs some time away to clear her head. She needs a break.

"I think it will do her good to get away and take care of herself and the baby for a bit. That's her number one priority.

"We know Bernie will be returning to Walford, but who knows what she will be coming back to? She knows how much this is going to hurt Stuart and Rainie, but Bernie is determined to put the baby first."