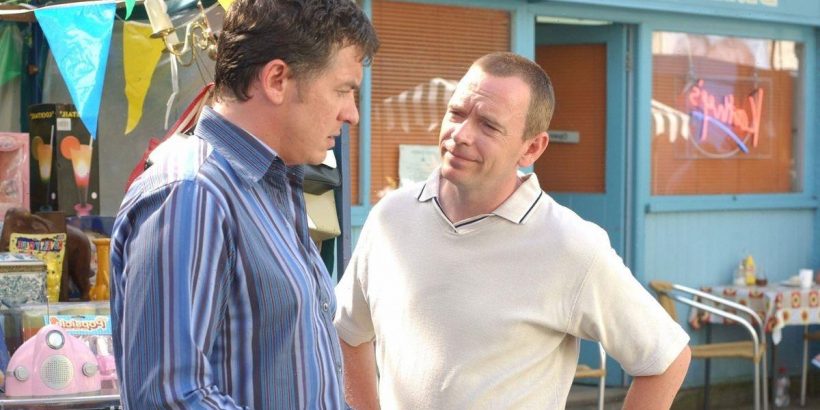 EastEnders fans were certainly in luck this week, after actors Shane Ritchie and Adam Woodyatt were seen posing together on social media.

Adam who plays the iconic Ian Beale took to Instagram to share a picture of himself and Shane who stars as the legendary Alfie Moon in the BBC soap.

Gleaming happily while showcasing a rather slimmed down look, Adam, 53, captioned the photo: "Small world! Got photo bombed by @theshanerichie yesterday #makesachangefromJake."

In the background Shane, 57, could be seen wearing a black cap and black jacket while he gawped surprisingly in the snap.

Some of Adam's 68.2k followers seemed to love the photo too and took to the comment section to share their views on the soap stars.

One fan joked: "Haha he looks equally shocked to see you."

Another said: "Oh I love this pic."

Adam, who is currently taking an extended break from playing his famous character appears to be enjoying his well deserved time off from Walford.

Last week, the actor enjoyed a coffee with his fellow cast mate Jake Wood, who played the adulterous Max Branning in the popular drama.

The actors posed together for pictures in London twice this month with Adam recently sharing the hashtags "#peoplewilltalk" and "#muststopmeetinglikethis."

But although Adam has played Ian Beale since 1985, he has warned fans that he may not return to the iconic soap any time soon and has claimed that his return is not yet set in stone.

Talking to publication Metro in July, the star said: "I won’t be going back until this time next year at the absolute earliest.

"I’m committed to touring with Looking Good Dead until the end of October. I’m then goAing to America because my daughter is getting married.

"Then hopefully we’re going to pick the tour up and do some of the venues that were originally planned but that we hadn’t managed to get to. That’s likely to be January to April."

Ian Beale left Walford after he discovered that his "lover" Sharon Watts was slowly poisoning him.

Sharon was trying to murder Ian after she discovered that he may have been involved in her son's tragic death.

EastEnders continues Tuesday on BBC One at 7.35pm