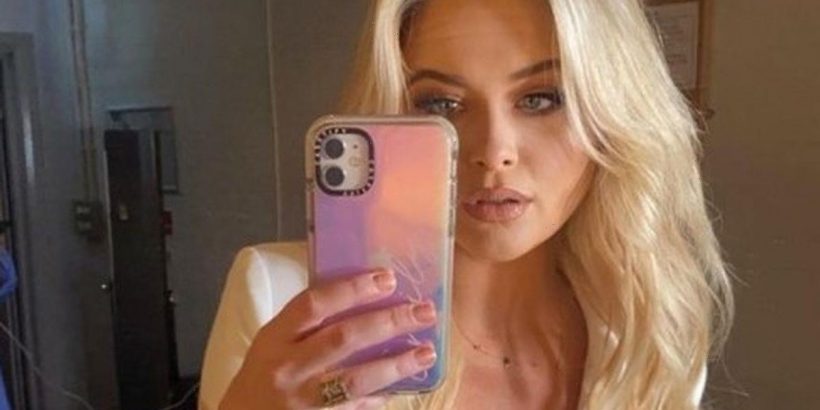 Emily Atack reunited with her former I'm A Celebrity campmate Adam Thomas after the Manchester leg of her stand-up tour.

The pair shared a hug as they met up after Emily's comedy gig.

They were campmates in the 2018 series of ITV's I'm a Celebrity Get Me Out of Here!

Emily, 31, conducted another successful stint of her tour as Adam, 33, watched in the audience at The Lowry theatre on Monday.

The blonde bombshell looked chic in a stylish oversized white shirt and black jeans with her hair styled in a messy up-do.

The Emmerdale star opted for a more casual look in black jeans and white trainers which he paired with a grey wool hat.

This comes after the actress shared a range of stunning snaps over the weekend – one of which included her posing nude and confessing she forgot to bring her pyjamas with her.

Emily took to Instagram to share a photo of herself after her show in Brighton on Saturday night, with the beauty donning a smile and telling her followers: "Brighton, you were a f***ing amazing audience tonight. This is my sober(ish) Saturday smug bedtime face."

She appeared to ditch her clothes – so before fans could begin to question her, she decided to tell them herself. In a second photo, Emily's bedding was pulled down a little more with a hint of cleavage on show, while Emily stuck out her tongue as she posed for the snap.

She captioned it: "…and defo the face of someone who forgot to pack pyjamas."

When she woke up the following morning, she teased that she was onto something else big as she started getting ready for the day.

On Saturday night, the beauty headed up her own show – and certainly looked glamorous in the process.

Donning an all-white outfit, she opted for a dazzling plunging blazer dress and a pair of trousers to match as her hair sat by her shoulders in subtle waves.

Emily had a glamorous make-up look and finished off with a nude lip combo and a brown and gold eyeshadow to match.

Taking to Instagram, she wrote: "Thank you @o2forumktown for having me and my potty mouth last night. What a bloody night. This is the suit I wore which made me look like a hologram on stage."