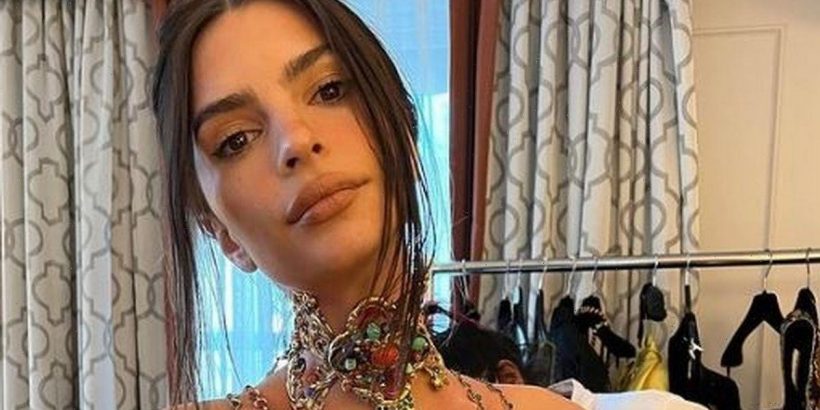 She’s never been one to shy away from the camera when showing off her killer supermodel looks – and her latest snap is no different.

On Friday (July 1), American actress Emily Ratajkowski gave her 29.4million fans quite the awakening as she showed up in her birthday suit while laying down next to her perfect pooch Columbo.

The brunette beauty, 31, was seen posing up a storm as she as she laid out on a colourful rug and playfully mimicked her dog’s goofy position as she beamed to the camera above them.

Her cheeky snap showcased her peachy derriere as she copied her four-legged friend’s playful pose, who had his paws up while he stretched out on the floor.

In the mid-morning snap, a pair of white trainers could be spotted in the corner of the photo, presumably where the mum-of-one had pulled them off before getting into position beside her furry friend.

A novel titled The Corrections by Jonathan Franzen could also be seen next to the super model which follows the winding tale of diaspora of the modern American family.

The bronzed goddess simply captioned the funny snap: “baby boi bumbi” as her adoring fans flooded to her comments section to shower her with compliments online.

One user penned: “It is scary and at the same time [an] incredible picture [applause emoji].”

Another agreed: “This is a great photo” while a third cheekily quipped: “I’d be smiling if I was that dog too [cry laughing emoji].”

Meanwhile, one user confessed: “This was me and Lola while the bf was away [cry laughing emoji].”

Many assumed the loving mum’s husband, film producer Sebastian Bear-McClard, was responsible for the racy snap which was taken from inside their living room.

The happy couple – who tied the knot back in 2018 – tend to keep a low profile as a couple and are rarely spotted posting about each other on social media.

But away from the internet, the pair can often be seen walking around New York City together with their little fur baby Columbo.

They also share an actual child together, Sylvester Apollo Bear, who they welcomed last March, with the proud mum regularly updating her loyal legion of fans about him online.