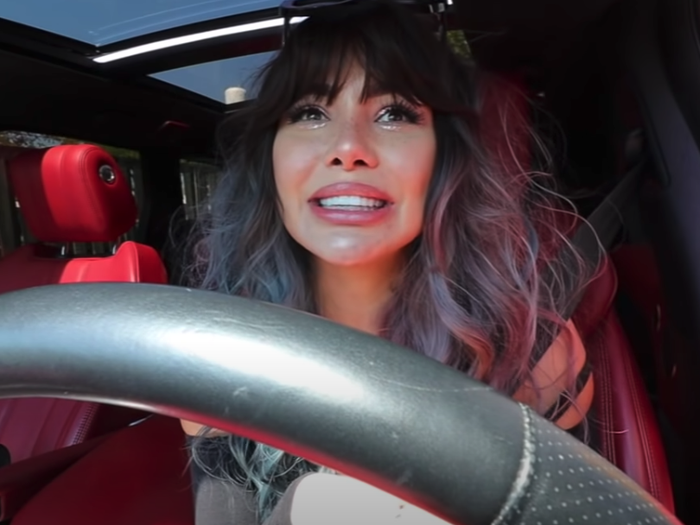 An influencer known for her Mukbang eating videos has gone full QAnon. In Instagram stories, Veronica Wang, who has 1.73 million YouTube subscribers, called Democrats "demons" and baselessly accused the party at large of pedophilia and child trafficking.

QAnon is a big-tent conspiracy theory based on the false notion that President Donald Trump is trying to defeat a "deep state" cabal of satanic pedophiles and child traffickers. The conspiracy theory has gained popularity during the pandemic and has become popular in some circles of influencers, particularly lifestlye and wellness bloggers.

Screenshots of the stories, which are no longer available on Wang's Instagram, were posted on Twitter by Dennis Feitosa, who runs the Def Noodles influencer news account. The stories appeared to be from over the weekend, when commenters on Wang's latest post began criticizing her.

Wang, who has 197,000 Instagram followers, didn't explicitly cite QAnon, but the claims come directly from the conspiracy theory movement. Wang is known for mukbangs, which are extreme-eating videos. She did not immediately respond to a request for comment.

In her Instagram stories, Wang made the false accusations that "satanic Democrats" were "sacrificing children, aborting and selling last trimester babies, and raping kids." Wang added that while she doesn't like Trump, she does not believe that he is "sacrificing" children.

In a later story, Wang said she was not against abortions, but attacked Planned Parenthood using deceptive smears that were largely debunked by a congressional investigation from the House Committee on Oversight and Reform.

In another story, she posted clips from a video promoting wild conspiracy theories about Joe and Hunter Biden.

Wang also compared Biden to Anthony Weiner, the disgraced former congressman and convicted sex offender, who is believed by conspiracy theorists to have had a laptop with a video dubbed "Frazzledrip." The video does not exist, but QAnon conspiracy theorists continue to believe without evidence that there is a video showing Clinton and her longtime aide Huma Abedin (Weiner's ex-wife) ripping off and wearing a child's face before drinking his blood. Wang said Weiner's laptop contained a video of "killery," a nickname for Hillary Clinton, "slicing a child's face off and wearing it."

On Wang's latest Instagram, which she posted on Friday, the comments are full of people criticizing her for the QAnon-related rhetoric. "Didn't know you were a Q anon supporter. I'm so disappointed," wrote one commenter on Saturday. "I've been a big fan of yours for years but to see you post crazy conspiracy theories and lies has me super disappointed. I am no longer a fan and will be unfollowing," said one Monday comment. "Girl! You have officially lost it," said another.

In response to a commenter saying that she was unfollowing in light of the QAnon stories, Wang said, "GOOD I DONT SUPPORT PEDOPHILES." Accusing perceived enemies of pedophilia is part of what has made QAnon hard to stop. Even President Trump said in a town hall event in October that QAnon was simply "against pedophilia." In reality, though, human trafficking organizations and experts have repeatedly said that the movement has a dangerous misunderstanding of trafficking.

QAnon's recent and rapid rise comes as the movement's incendiary theories have been linked to several violent crimes, including murders, as well as attempted kidnappings. The FBI warned last year that the movement could become a potential domestic terrorism threat. On Thursday, as Trump supporters protested Biden's projected win, two men believed to be QAnon supporters were arrested for driving an SUV full of ammunition to a Philadelphia ballot-counting center.

Facebook, which owns Instagram, has made steps to curb the spread of the theory on their platforms, announcing a company-wide ban on the conspiracy theory and its rhetoric. But Wang's QAnon beliefs were mostly spread via stories, which automatically disappear after 24 hours, and went untouched by the platform. Insider has reached out to an Instagram representative for comment.