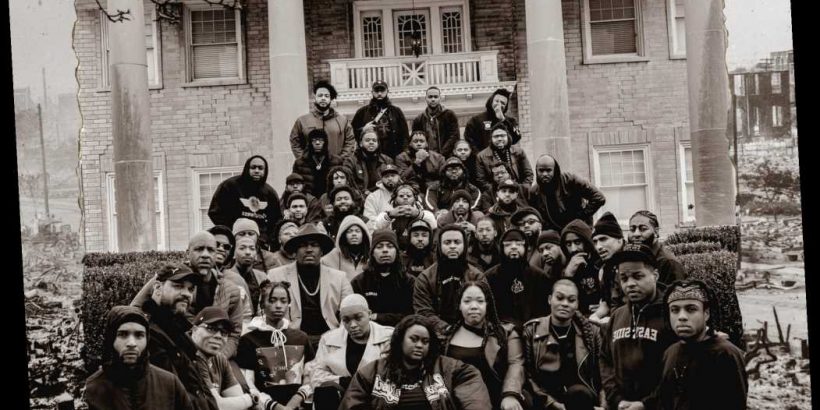 Motown Records is gearing up to release a new collaborative album to commemorate the 1921 Tulsa Race Massacre.

Titled Fire in Little Africa, the hip-hop collection will feature 21 songs from Oklahoma artists and is scheduled to drop on May 28, three days before the riot's 100th anniversary.

According to a release, Fire in Little Africa "gets to the truth of what happened on May 31 and June 1, 1921 when a white mob descended on the streets of Greenwood — then a prosperous Tulsa neighborhood known as Black Wall Street — and burned down the business district, destroying roughly 1,500 homes, killing hundreds and leaving thousands of Black Tulsans homeless."

Ethiopia Habtemariam, chairman and CEO of Motown Records, says in the release that the forthcoming album "is a powerful and timely project that provides a platform and outlet for the incredibly talented and thriving music community of Tulsa, Oklahoma."

"Carrying the legacy of the Black Wall Street community, Fire in Little Africa is a body of work filled with purpose and prolific storytelling," Habtemariam adds. "I am honored and feel privileged to have Motown Records/Black Forum partner with Dr. View, the Bob Dylan Center and [Woody] Guthrie Center to release this impactful hip-hop album." Woody Guthrie Center/Bob Dylan Center's Stevie "Dr. View" Johnson, who executive produced the album, says in the release that Fire in Little Africa "has evolved into a communal hip-hop movement, and we're excited that we get to share the flavor, history and legacy of Black Wall Street with the world, in collaboration with the amazing leadership of the Motown/Black Forum family."

Fire in Little Africa was recorded in Greenwood in March 2020, across five days. According to the release, "Studios were set up at the Greenwood Cultural Center and other locations, including the former home of 1921 massacre mastermind/KKK leader Tate Brady. The house is now owned by former NFL first-round draft pick and Tulsa native Felix Jones."

Beginning on May 31, 1921, and lasting until June 1, the Tulsa Race Massacre is said to be the "single worst incident of racial violence in American history," according to the Oklahoma Historical Society.

It began after a young black man named Dick Rowland rode alone in an elevator with a white woman named Sarah Page on May 30 of that year. Rowland was arrested the following day and allegedly accused of sexually assaulting Page, and a white mob demanded he be turned over to them. A group of approximately 25 black men went down to the courthouse and offered to help protect Rowland, fearing that he may be lynched by the mob, but were turned away. As the mob continued to place pressure on the sheriff and local guardsmen, more black men returned to the courthouse later that night.

Nearly 1,500 armed white men faced off against about 75 black men outside the courthouse. Shots were fired and the violence ensued, the historical society said.

The city was placed under martial law and the National Guard was brought in to halt the violence. At the end of the carnage, 35 city blocks were in ruins while over 800 people were being treated for injuries. It was reported that 36 died in the riot, but historians now believe that number may actually be in the hundreds.

Fire in Little Africa will be released on May 28.