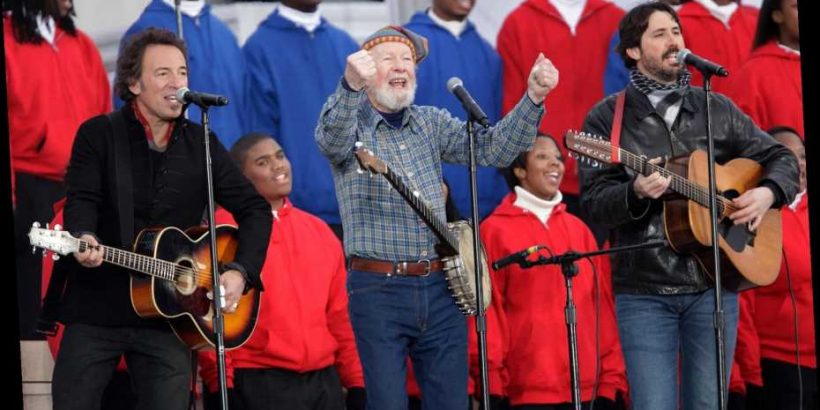 We’re just one day away from Joe Biden’s inauguration as America’s 46th president. This year’s ceremony is going to be a dramatically scaled-down event because of the pandemic and unprecedented security threats, but there will still be a celebration in the evening hosted by Tom Hanks with musical guests like John Legend, Foo Fighters, Justin Timberlake, Demi Lovato, Ant Clemons, and Bruce Springsteen.

Twelve years ago, Bruce Springsteen participated in the massive We Are One concert on the steps of the Lincoln Memorial to celebrate the incoming Obama/Biden administration. He opened the event by playing “The Rising” with the Joyce Garrett Singers and was followed by Mary J. Blige, James Taylor, Garth Brooks, Usher, Stevie Wonder, U2, John Mellencamp, and many others.

House-band guitarist Shane Fontayne remembers it as a bitterly cold day. “In rehearsals, you could only physically be outdoors for maybe 15 minutes,” he recently told Rolling Stone as part of our Unknown Legends interview. “By the day of the show, it had warmed up to a balmy 23 degrees or something. That was a lot warmer than what it had been. Afterwards, I remember Barack and Michelle coming by. Everyone was crowding around with their phones and everything. It was such a moment in time. … I suppose there was a great hope for something to transpire.”

Near the end of the show, Springsteen returned to the stage alongside Pete Seeger and Seeger’s grandson, Tao Rodríguez-Seeger. They played the Woody Guthrie classic “This Land Is Your Land” and included the controversial “private property” verse. Check out the video right here.

Later that year, Springsteen played Seeger’s 90th-birthday concert at Madison Square Garden and looked back at the historic moment. “That day as we sang ‘This Land Is Your Land,’ I looked at Pete, the first black president of the United States was seated to his right, and I thought of the incredible journey that Pete had taken,” he said. “My own growing up in the Sixties in towns scarred by race rioting made that moment nearly unbelievable, and Pete had 30 extra years of struggle and real activism on his belt. He was so happy that day. It was like, ‘Pete, you outlasted the bastards, man!’”

Nobody could have anticipated back in 2009 that Obama would be followed into the White House by the host of The Apprentice, or that Obama’s vice president would follow him in 2021 at age 78. History unfolds in ways nobody could possibly predict. But one thing seems consistent: If there’s a big inaugural bash to welcome a new Democratic president, Bruce Springsteen will be there.