The rumors came true in the final hour of Cal Jam on Saturday: Dave Grohl, back behind the drum kit, closed the second year of his annual rock festival with a six-song Nirvana reunion, including survivors Krist Novoselic and Pat Smear, briefly reviving the classic grunge sound and attitude of one of the great acts of rock & roll.

The short set came at the end of a typically explosive and euphoric Foo Fighters performance, which charted 25 years of the massively successful band that Grohl built in 1995 after the sudden end of Nirvana with the death of singer-guitarist-songwriter Kurt Cobain. Grohl has kept that history mostly at arm’s length from the Foos, but Saturday night in San Bernardino, California, he was ready to remember and celebrate.

The Nirvana players opened with “Serve the Servants,” joined on vocals and guitar by Deer Tick’s John McCauley, who brought the right edge and force to his voice. The set wisely mixed hits with deeper cuts, embracing Cobain’s noisier side on “Scentless Apprentice” and knack for a strange pop hook with “In Bloom,” both sung by McCauley. Several dozen fans’ cell phones were raised to capture the moment.

For the final three Nirvana tunes, they were joined by Joan Jett, reprising her role in the band’s induction into the Rock and Roll Hall of Fame in 2014. She began with the frantic, panicked “Breed,” fueled by her natural rock rasp here and then on “Smells Like Teen Spirit,” while slashing the immortal opening riff on her guitar.

The night closed with “All Apologies,” as Jett led the band through an understated, mournful version of the song. Novoselic handed his bass to Brody Dalle of the Distillers and picked up his accordion. Grohl briefly joined Jett on vocals in the song’s final moments, almost mournfully but true to the song, as the night faded out: “All in all is all we are…” 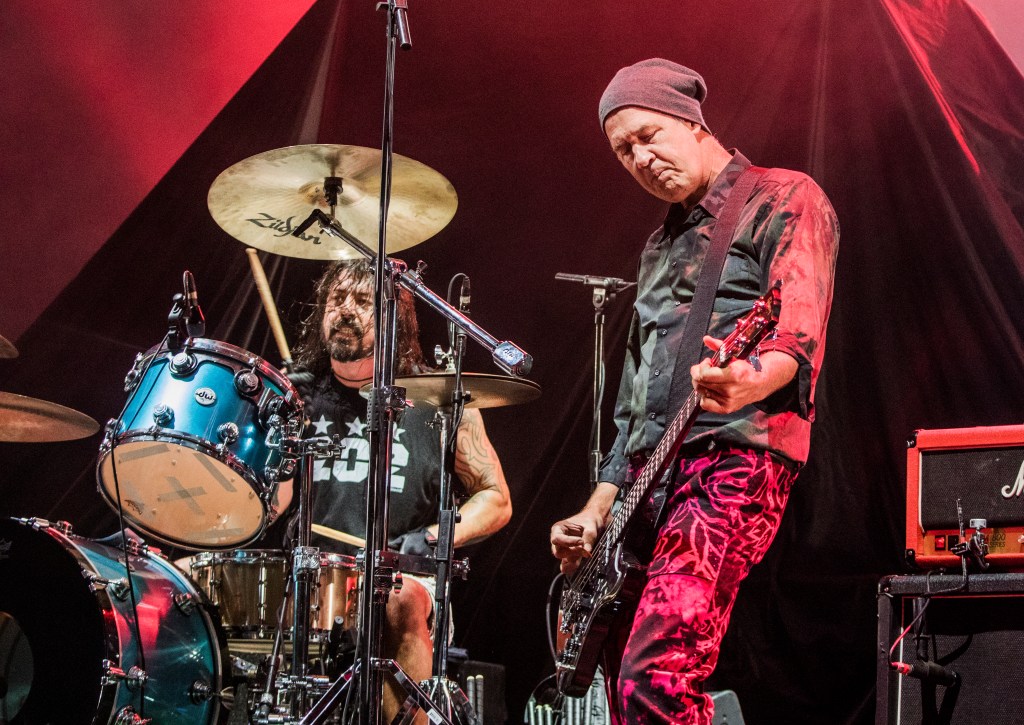 Two hours earlier, the Foo Fighters set began suddenly with Grohl running to the stage, chopping a single chord on his guitar. He wasn’t playing a song, but establishing a kind of excited, crashing energy that he’d maintain the full night. What led to the Nirvana encore was a Foos performance that charted the band’s music over 25 years, played chronologically in reverse.

Soon after came a soaring “The Sky Is a Neighborhood,” a collision of hard rock and a raging, but infectious Beatles-like melody that quickly turned into a shout-along with fans. It was an energetic opening for an 18-song Foos set of hits and favorite album cuts going back to the beginning of a band that Grohl first sketched out on a cassette tape (on display Saturday in the Foos Museum on the Cal Jam grounds). 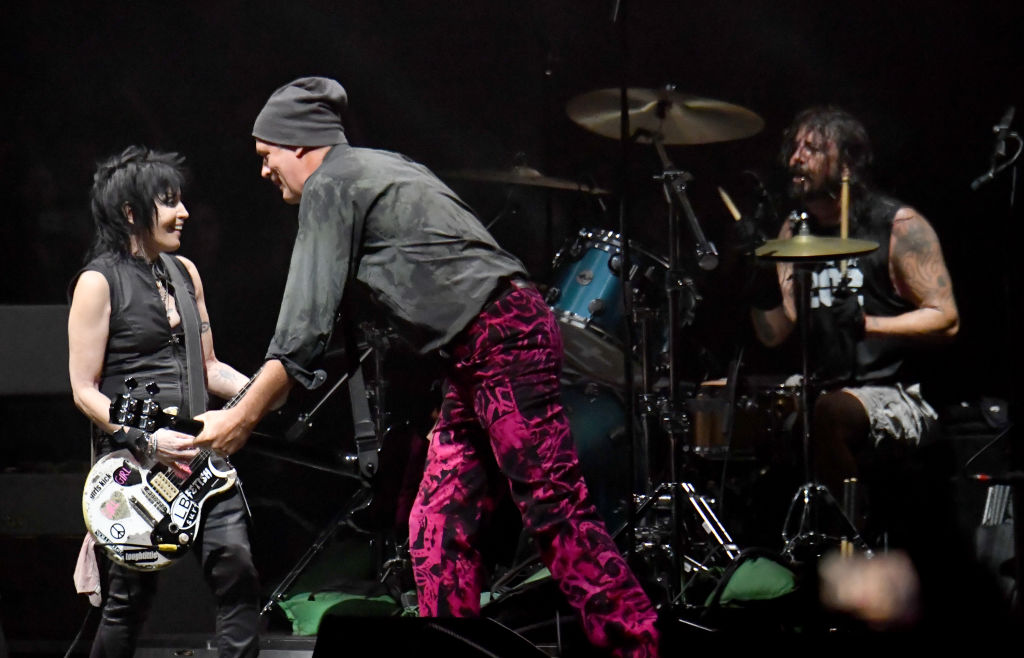 As ever, the Foos material was wild and combustible at the place where Grohl’s love for punk and classic rock coalesce into something raging and tuneful. During “The Pretender,” Grohl strolled the catwalk beside the stage and headbanged into the faces of fans, as the Foos stretched out on an extended Chuck Berry breakdown,  and guitarist Chris Shiflett unfurled a country-rock solo.

Many of the songs were just starting points, stretching far beyond their hit radio versions with added layers of sound and texture, shifts in tempo and tone. It was a show of enthusiasm that has grown over decades of shows.

Cal Jam is Grohl’s personal venue now, and he can do what he likes with it. In 2017, the rocker revived the name of a mostly forgotten SoCal-based festival from four decades ago and has made it his own, spotlighting not only the Foos but friends and heroes. Grohl linked the 2017 edition with the original Cal Jam by inviting Aerosmith’s Joe Perry onstage. This year, he looked back to his own story, all the way back to when his public life began in Nirvana at the beginning of the 90s. 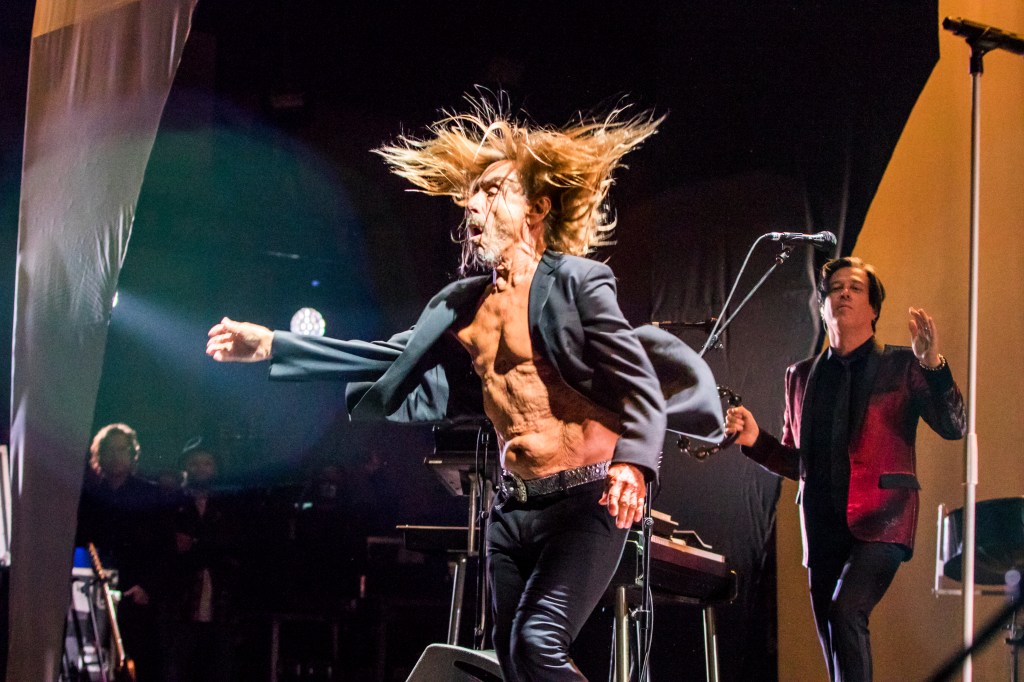 Second-billed Iggy Pop has his own deep history, and at Cal Jam reunited with the Post Pop Depression Band, offering a welcome encore for his collaboration between the singer and Josh Homme of Queens of he Stone Age. Pop bounded to the stage to the big beat of “Lust for Life,” a fitting theme for his work with this lineup of players, who pulled their burgundy smoking jackets from their closets.

Along with the group’s 2016 album Post Pop Depression, the set was focused almost entirely on Iggy’s two albums produced by David Bowie in the middle-Seventies: Lust for Life and The Idiot. The singer has sometimes included a song or two from these albums at his normal concerts, but it was a rare treat to hear.

“Sister Midnight” was a brooding, futuristic and cocky, with vocals rich and weighted with experience. On “American Valhalla,” multi-instrumentalist Troy van Leeuwen tapped out a melody on a steel drum. “Tonight” began like a Fifties teen tragedy, and Pop led into jaunty opening riff of “The Passenger” by asking: “Did anyone hitchhike here tonight? If I was a hitchhiker, would you pick me up?”

Throughout the long day of music, there were sounds ranging from FEA’s frayed bilingual punk rock to Tenacious D’s volcanic rock & roll obsessions. The latter pulled songs and comedy from their albums and the film The Pick of Destiny. At one point, the D’s Jack Black tossed a pick into the crowd, then said: “Did it go to the ground? Be sure to get that pick … I need it back!”

Greta Van Fleet soared with a fresh, youthful take on ancient classic rock textures, with early Led Zeppelin as their model. In beaded necklace, feathers and a colorful tie-dyed shirt, singer Josh Kiszka wailed like a young Robert Plant on “Flower Power,” from the band’s upcoming debut album, Anthem of the Peaceful Army.

Aside from having the look down, Greta Van Fleet delivered music big and emotional, with accelerating guitar flourishes from Jake Kiszka and organ from bassist Sam Kiszka. 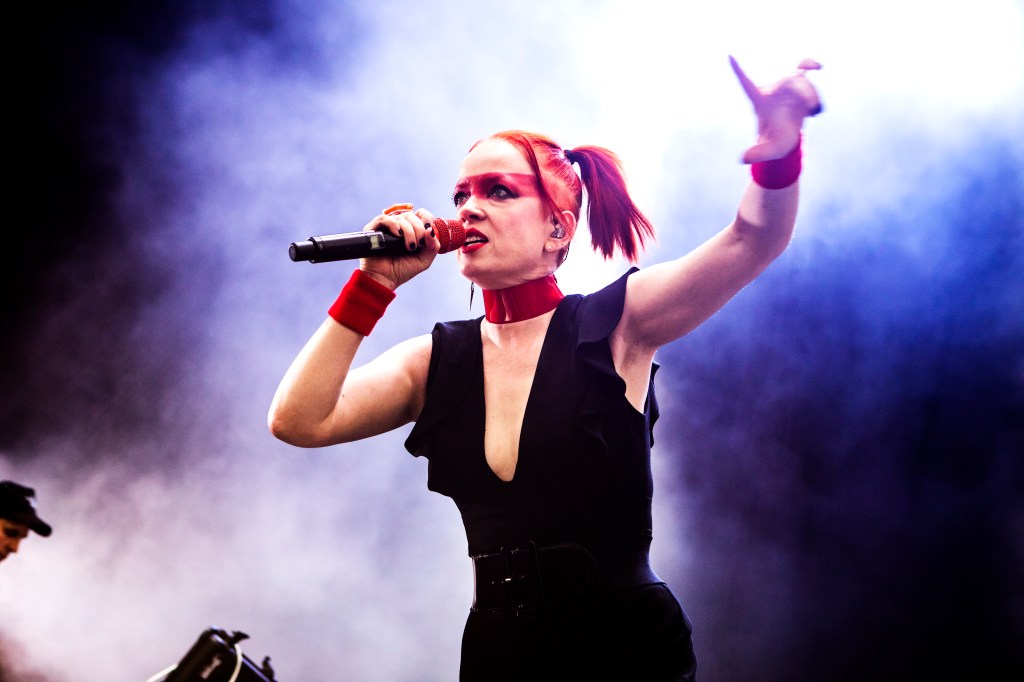 Earlier, Garbage delivered a stirring, dramatic set, taking a break from their current tour devoted to performing 1998’s Version 2.0 to rip through a series of urgent rock tunes stretching from the 90s to the present. Singer Shirley Manson arrived with an orange stripe across her eyes to open with 2017’s “No Horses,” an apocalyptic cautionary tale, with two guitars slashing.

Even well-known hits came off as heavier, adding more snarl to “Stupid Girl” and “Paranoid,” the latter sending Manson rolling across the stage as the band veered into a thunderous breakdown of guitars, drums and electronics.

Near the end of Garbage’s set, Manson sat on the drum riser to begin singing “Only Happy When It Rains” like a torch song, just as a light sprinkle began falling on the crowd. If anyone got a little wet there, blame Shirley.