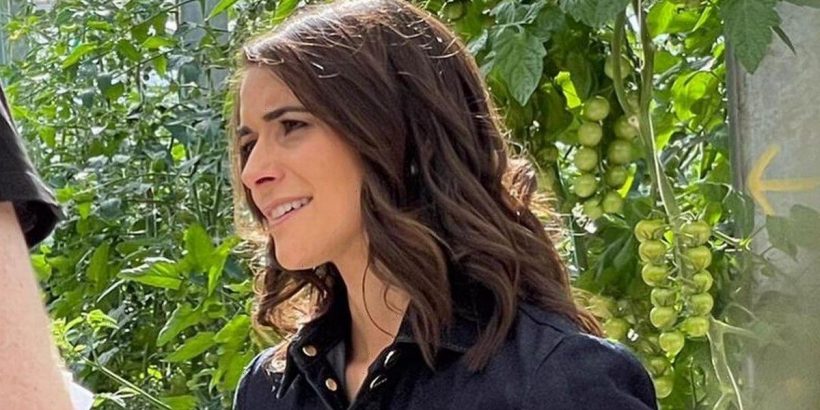 Good Morning Britain weather girl Lucy Verasamy stole the show in the sun as she posed for a summery snap shot in Edinburgh last week.

As a meteorologist on the ITV breakfast show since 2005, it's clear the 40-year-old stunner knows a thing or two about how to prepare for a British heatwave.

However, it appears Lucy was bringing the heat herself as she put on a scorching display whilst wearing a tight blue denim skirt which highlighted her toned body and slender frame.

The short denim skirt featured a zip running down the centre and was cropped high-up near her waist, letting Lucy flaunt her tanned and glowing legs in the sun.

Lucy decided to pair her fashionable denim skirt with a breezy white top that she tucked into her waist before topping off the look with a pair of matching-colour white converse shoes.

Smiling for the camera, Lucy donned a pair of shades as she stood in front of an incredible backdrop of Edinburgh's scenery, with the famous Edinburgh Castle perched high in the background amid an array of colourful flowers.

Taking to Instagram Stories, she was clearly missing her time in Scotland as she captioned the throwback snap: "Edinburgh last week…"

In a second picturesque snap, she went on to write: "This city [Edinburgh] in the sunshine is even more" before signing off with a love-heart emoji to express her admiration for the place.

Lucy was stood with TV chef Chris Baber – who rocked a classic combination of white T-shirt and black shorts – as the pair appeared to enjoy a scenic stroll around the historic landmarks of the city.

It comes as Lucy has been working with chef Chris on an exciting filming project after teaming up with retail giant Marks and Spencer – and the TV project has seen Lucy search for great foods around the country as she explores the world of farming.

As well as roaming around Scotland she recently toured Lancashire to try freshly picked tomatoes, where she gave her followers a sneak peek into her lush-looking food project.

Alongside a behind-the-scenes video clip of her collecting tomatoes from the vine with her foodie co-star Chris, she explained: "Landed in Lancashire to talk tomatoes.

"Lancashire is historically known as the 'salad bowl' of England: it's peaty soils making it perfect for growing vegetables."

She had also been filming in a green house, and she shared a series of sexy snaps where she could be seen sizzling in another figure-hugging denim dress.

She captioned the snaps: "Behind the scenes and tomato vines".