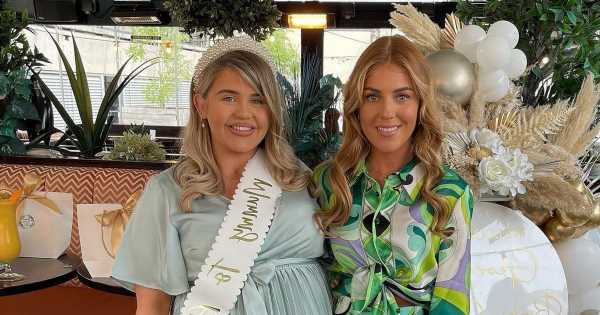 Gogglebox favourite Georgia Bell is currently expecting her first child with boyfriend Josh Newby and has been exciting fans with snaps of her latest home transformation.

The Channel 4 star is expecting a baby boy who is due to be born in July. Earlier this year, Georgia revealed her son would be called Hugo James Newby.

Georgia, 20, currently lives with Josh in an immaculate house in Durham.

She has recently been sharing snaps to her Instagram Story of her new bathroom, which was transformed by The Bath Fitting Company.

The stunning room has a grey and white marble design throughout and features black statement pieces. She also has a large bathtub which will no doubt leave fans feeling envious.

"The one room I've looked forward to getting done since we moved in and all I can say is I'm obsessed!!!!" Georgia has been a star on Gogglebox since 2018 and she regularly appears alongside her best friend Abbie Lynn.

The pair have filmed many clips inside Georgia's house and are often seen sitting on her grey velvet sofa whilst they chat about the latest TV hits. Georgia recently told Abbie, 21, all about her pregnancy stress.

During Gogglebox's last episode of the series, Georgia told her best friend that she has had to get her hospital bag ready.

She said: "Went to the midwife the other day and she said, ‘oh you should start packing your hospital bag'."

Abbie asked if she was joking and Georgia continued: "I went 'you what?', she went, 'you know, your little hospital bag', and I said 'what the hell do I put in that?'"

She later explained that the midwife had suggested including some snacks for her and her boyfriend in case they get hungry.

Abbie then said: "Really? No, you know what there’s a little café in the hospital that you’re going to and they do some alright food in there.

"My dad once had a cheesy bean jacket potato there, so if Josh gets hungry he can go down to the café and get something there."