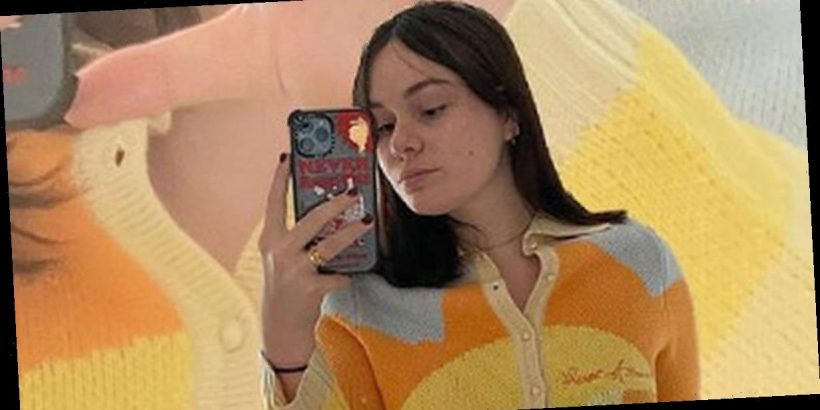 Gordon Ramsay 's daughter Holly has stripped down to a teeny pair of shorts and a cropped cardigan as she flashed the flesh.

In the picture, Holly can be seen flaunting her abs as she posed up a storm in a teeny pair of black runner shorts which she wore high up on her waist but low enough to reveal her belly button.

Flaunting her flat stomach, Holly paired the shorts with a cropped yellow, orange and cream cardigan which she wore with one button undone.

Holly was clearly and understandably feeling herself as she took a number of selfies in the killer outfit.

She could be seen posing with a burgundy manicure as she held her phone up to a mirror to take the picture.

The star then used either what appears to be cropping or a filter to overlap the image one over the other.

The pretty brunette bombshell also went bare-faced for the occasion as she ditched the makeup and let her natural beauty flow.

Holly captioned the snap with a series of yellow emojis, including of a flower, lemon, cheese and of a pot of honey.

The star celebrated her 21st together with her twin brother Jack in lockdown over the New Year due to the coronavirus pandemic.

It comes after Gordon launched the Chef Blast kitchen challenge for phones and tablets which has been slammed by fans because there are no F-words in it.

Gordon is known for his expletive-filled rants and outbursts, so fans couldn't believe that the app was so tame.

One disgruntled user wrote: "No swearing at all."

Another said: "Boring – he doesn’t swear."

A third moaned: "Utter ducking rubbish. Not even a swear word."

Gordon, 54, said he hoped the game, which is free to download, would entertain families during lockdown and also inspire them to cook.

He told fans on Instagram: "Who’s that handsome animated devil?

"It’s me in my newest game #ChefBlast!

"Head to my stories to download my fun new puzzle game! And yes I do yell!"