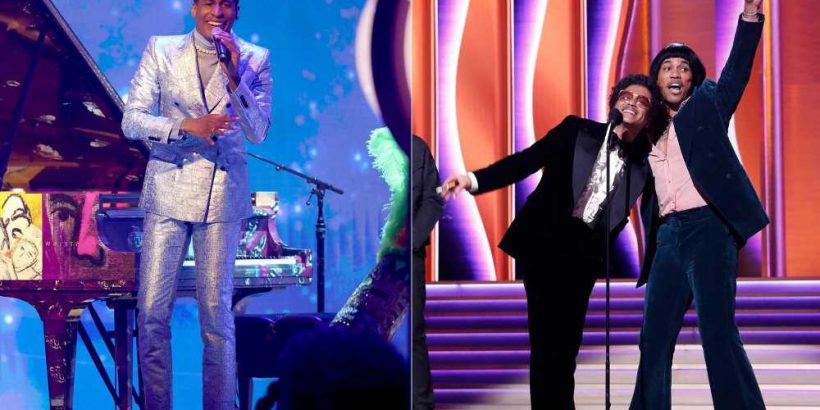 Silk Sonic coasted to big wins for Record and Song of the Year at the 2022 Grammy Awards, while Jon Batiste scored a major Album of the Year upset.

Silk Sonic, the incomparably smooth retro-soul duo of Bruno Mars and Anderson .Paak, in fact picked up all four of the awards they were nominated for at the April 3 ceremony — Record of the Year, Song of the Year, Best R&B Performance, and Best R&B Song — all for their single “Leave the Door Open.” Those Record and Song of the Year wins were both moderate surprises, especially since “Leave the Door Open” was up against such acclaimed megahits as Olivia Rodrigo’s “Drivers License,” Lil Nas X’s “Montero,” and Doja Cat’s “Kiss Me More.” Then again, Mars is a true Recording Academy darling, and has now won 14 of the last 17 Grammys he’s been nominated for, going back to a 2014 Best Pop Vocal Album win for Unorthodox Jukebox.

Batiste, meanwhile, came into the night with 11 nominations — the most of any artist this year — and left with his first five Grammys, none bigger than the Album of the Year trophy he took home for We Are. He also won Best American Roots Performance and Song for “Cry,” Best Music Video for “Freedom,” and Best Score Soundtrack for Visual Media for Soul (which he shared with Trent Reznor and Atticus Ross).

Rodrigo, who was widely perceived as a frontrunner for this year’s awards thanks to the huge success of her breakout debut, Sour, didn’t exactly go home empty-handed — she won Best New Artist, Best Pop Solo Performance for “Drivers License,” and Best Pop Vocal Album for Sour. (You can check out the full winners list for this year here.)

Other big winners included Doja Cat, who won her first Grammy — Best Pop Duo/Group Performance for “Kiss Me More” with SZA — and Jazmine Sullivan, who finally won her first Grammy after being nominated 12 times prior to 2022. Sullivan took home Best R&B Album for her celebrated LP Heaux Tales, along with Best R&B Performance for “Pick Up Your Feelings.”

(For those looking for a fun bit of Grammys trivia, Batiste and Sullivan also happened to be involved in the two rare ties that occurred this year: Sullivan shared Best R&B Performance with Silk Sonic’s “Leave the Door Open,” while Batiste, Reznor, and Ross split Best Score Soundtrack for Visual Media with Carlos Rafael Rivera’s work on The Queen’s Gambit.)

As with last year’s awards, the 2022 Grammys were delayed by months due to Covid-19 concerns, but unlike last year, organizers this time did not appear to keep the proceedings any more intimate or scaled-back than usual. With a fairly full crowd — albeit seated at what appeared to be socially-distanced tables — the 64th Annual Grammy Awards were big and boisterous, with plenty of eye-popping showpieces befitting the Las Vegas setting.

Host Trevor Noah was honest about what the Grammys telecast is these days, for better or for worse: “Don’t even think about it as an awards show,” he quipped in his introductory monologue. “This is a concert where we’re giving out awards.”

Silk Sonic set the mood with an apt opener, a medley that culminated in — of course — their ode to Sin City, “777.” Afterwards, Rodrigo wheeled out a vintage Mercedes Benz for her performance of “Drivers License,” then made a delightful cameo at the start of BTS’ elaborate performance of “Butter,” which had an Oceans 11-style heist vibe (albeit with way more dancing).

Rising Argentinian singer María Becerra got a well-deserved Grammy moment when she joined J Balvin for a rendition of their duet “Qué Más Pues?” Balvin then brought out a host of masked dancers for performance of his high-energy hit with Skrillex, “In Da Getto.” Lil Nas X, meanwhile, invited his own chorus of haters to the stage, filling the screens with angry tweets and news footage about his controversial music video for “Montero (Call Me By Your Name)” as he performed the song, before linking up with Jack Harlow for their hit “Industry Baby.”

Later in the show, H.E.R. harkened back to the all-star Grammy moments of yore, leading a wild cross-genre collaboration that featured cameos from Jimmy Jam and Terry Lewis, Travis Barker, and Lenny Kravitz. Not only did this performance feature a whole lot of guitar shredding, but Jimmy Jam even busted out the keytar for the occasion.

Meanwhile, Eilish, who went home Grammy-less for the first time in three years, still delivered one of the night’s major showstoppers, a thundering rendition of “Happier Than Ever,” delivered in a downpour, with the singer sporting a T-shirt honoring late Foo Fighters drummer Taylor Hawkins.

Hawkins got a more thorough tribute later in the evening, with a special montage set to the Foo Fighters’ “My Hero.” In what was surely a bittersweet moment, Foo Fighters also swept the rock categories, winning Best Rock Album, Best Rock Song, and Best Rock Performance for Medicine at Midnight, “Waiting on a War,” and “Making a Fire,” respectively.

Generally speaking, the 2022 Grammys found the Recording Academy continuing its efforts to buck any lingering perceptions of themselves as a stodgy, old-school institution. These Grammys very much wanted you to believe that they are with it, hip, or whatever else people who are in touch with the zeitgeist say these days. But old habits die hard, and nowhere was that more apparent than the rather striking lack of rap during the evening. Sure, hip-hop was present insofar as it has thoroughly permeated global pop music, from Lil Nas X to BTS. But a solo performance by Nas (the original version) was a rare moment of straight-up rap music at this year’s show  — and a well-deserved one, as the veteran MC tore through a career-spanning selection of hits after notching his first Grammy win last year. Latin music of all kinds was also oddly absent from the show’s key moments, aside from that Balvin performance.

Arguably the most embarrassing thing for the Grammys this year, though, was the fact that Recording Academy members saw fit to award Louis C.K. with  Best Comedy Album for Sincerely, five years after he admitted to several sexual misconduct allegations.

No awards show happens in a vacuum, and the Grammys did gesture at times to the chaos currently unfolding around the world. There were several nods to the pandemic’s lasting and continued impact on the live music industry, with touring crew members introducing performances by Eilish, Chris Stapleton, H.E.R., and Carrie Underwood.

And in one of the night’s most surprising moments, Ukrainian president Volodymyr Zelensky delivered an emotional video message in which he said, “Our musicians wear body armor instead of tuxedos. They sing to the wounded in hospitals. Even to those who can’t hear them. But the music will break through anyway.” John Legend then took the stage, performing his new song “Free,” with the help of Ukrainian singer Mika Newton and poet Lyuba Yakimchuk.

As for all the awards given out in the hours before the telecast, big prizes went to Tyler, the Creator (Best Rap Album for Call Me If You Get Lost), St. Vincent (Best Alternative Music Album for Daddy’s Home), and Bad Bunny (Best Música Urbana Album for El Último Tour Del Mundo). Kanye West added two more wins to his Grammy tally, taking home Best Melodic Rap Performance and Best Rap Song for “Hurricane” and “Jail,” respectively. And Stapleton thoroughly dominated the country categories, winning three out of four trophies, including Best Country Album (“Starting Over”), Best Country Solo Performance (“You Should Probably Leave”), and Best Country Song (“Cold,” which he also performed during the telecast).

There were plenty of first-time Grammy winners this year, as well, among them Las Vegas’ own Baby Keem, who was up for four prizes and took home Best Rap Performance for his collaboration with Kendrick Lamar, “Family Ties.” Arooj Aftab, the Pakistani vocalist who picked up an unexpected, though certainly deserved, nod for Best New Artist, won in the other category where she was nominated: Best Global Music Performance for “Mohabbat.”

Comedian Bo Burnham also nabbed his first Grammy, with a Best Song Written for Visual Media trophy for “All Eyes on Me.” After nine nominations, the country duo Brothers Osborne scored their first Grammy as well, winning the lone country trophy that Stapleton didn’t — Best Country Duo/Group Performance for “Younger Me.” And one of the most surprising wins of the night came in the Best Musical Theater Album category, where first-time winners Emily Bear and Abigail Barlow bested legends including Andrew Lloyd Webber, Burt Bacharach, and even Bob Dylan to take home the prize for their TikTok-inspired project, The Unofficial Bridgerton Musical.