It was originally written as a personal tribute, but it went on to become a hit single on the airwaves, a national symbol of resilience after a terror attack and, later, a meme-ified emblem of seasonal malaise. This year marks 13 Septembers since Green Day’s “Wake Me Up When September Ends” was released, but the song has remained well-ingrained in the zeitgeist — a trend that’s solidly evidenced in the numbers.

Each year around the beginnings of September and October, the track’s official music video sees a significant spike in daily views, according to figures provided by YouTube. In 2018, views went from roughly 50,000 each day to around 101,313 on September 1st, 103,669 on September 30th and 107,058 on October 1st — more than doubling. 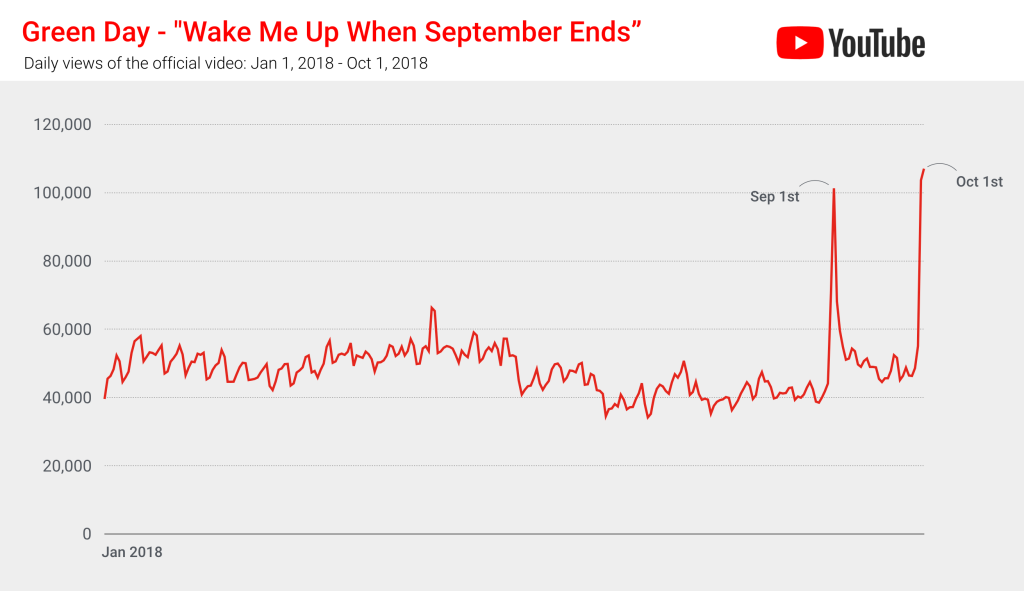 When CDs and digital downloads were the primary way people listened to music, fans queueing up the song for a nostalgic spin wouldn’t have translated to much more than a slight boost in attention for the band. In the era of video- and music-streaming, though, a 100 percent spike in listening means a decent pile of new royalties paid to the band, without the artists, labels or managers needing to do anything at all. In 2017, YouTube’s global music head Lyor Cohen said the video-streaming service pays as much as $0.003 per stream in royalties; if we take that high-end estimate, Green Day is pulling in an extra several hundred dollars every year on those two dates from its music video on the site.

That doesn’t seem like much, but that’s only one platform and doesn’t factor in the plays on other streaming services. Music industry executives love to rave about the “long-tail” possibilities of songs on streaming platforms like Spotify and YouTube: If a piece of music has staying power in the modern age, it means labels and artists no longer get paid just once for gaining a new fan; they’re potentially rewarded every single time that fan goes back to listen.

“Wake Me Up When September Ends” shares its lingering potency with at least one other track: Earth, Wind and Fire’s “September,” which is 40 years old this year, also sees a massive spike every year in its namesake month. According to YouTube, the music video saw its biggest-ever surge in 2017, when daily views reached over 447,000 on September 1st (a 116 percent increase over its daily average) and over 797,000 on September 21st (a 286 percent increase). Long live the profitability of seasonal music — which Christmas albums, of course, figured out a while ago.