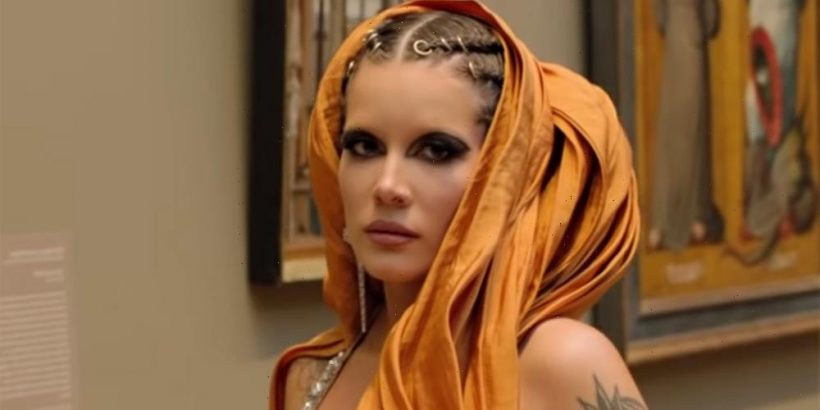 Halsey took aim at record labels and the media in a new interview centered around her latest album “If I Can’t Have Love, I Want Power.”

The singer-songwriter, who uses she/they pronouns and recently welcomed their first child, said that they had to run their pregnancy by music executives, who care more about profits than the personal freedom of their artists.

“You have to call the CEO of X, Y, Z and say, ‘Hey, hi. I’m just calling to let you know, I’m pregnant. I didn’t want you to find out on Instagram. I wanted to tell you myself, personally. It’s still business as usual over here though, don’t worry,’” Halsey told Apple Music’s Zane Lowe. “‘My personal choice isn’t going to affect your profitability or your productivity or your assembly line. And also, in what world would you ever have to call me to tell me that you were having a baby? But I have to call you because it impacts your product.’” (Halsey is signed to Capitol Records.)

The artist, who is featured bare-breasted and holding a baby on the album’s cover image, then said that print magazines did not want to feature them on covers due to their pregnancy.

“I mean, there was publications [that when] we were going out and trying to set up magazine covers based around the album release, they were like, ‘Yeah, but is she going to be pregnant? Because we don’t want to do a maternity cover,’” Halsey said. “And I was like, ‘It’s not a maternity cover. It’s about my album, I just happen to be pregnant.’ And they’re like, ‘No, it’s a pregnant cover.’ And I was like, ‘So I can’t go talk about my album?’”

Discussing the challenges faced by female artists, Halsey said she has learned to embrace getting older, despite the industry’s emphasis on youth, particularly in the pop lane.

“I think that the weight of…a female artist [is] deciphering time as not your enemy, when you’ve been taught for so long to think that it is. ‘Don’t get too old. Don’t get pregnant because then you can’t go on tour,’” Halsey said. “It’s really nice to be able to look at time as an ally, where for me time has been the best thing that’s ever happened to me. It’s allowed me to grow and allowed me to heal and allowed me to develop. I do remember around ‘Manic’ being like, ‘I’m washed… What’s next for me? When are people going to get sick of it? I’ll probably have to have a baby and start a family and then I’ll just be done being Halsey.’”

Watch the full interview below.