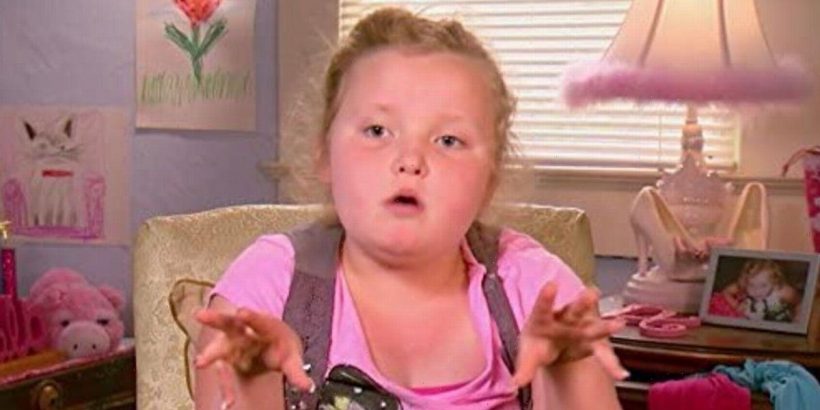 Alana 'Honey Boo Boo' Thompson has undergone a complete transformation after getting a stunning new makeover for a Teen Vogue photo shoot.

The reality star looked unrecognisable, as she posed up a storm in several high fashion glamorous outfits.

She is best known for her 'go-go juice' (which is a mixture of Red Bull and Mountain Dew), her sassy catchphrases as well as the family's infamous ketchup and butter spaghetti.

Now that she is nearly 16, the star has got candid about growing up and away from the Honey Boo Boo persona.

"I guess people still expect me to be little Honey Boo Boo and I'm not anymore. Just because I'm from the south, people expect me to be all country bumpkin, out riding four-wheelers all the time, but that's not really how it is," she told Teen Vogue.

She discussed her goals to make money, get straight A’s and being the best she can be, as well as saving up to buy a car and wanting to be a nurse someday.

Alana rose to fame on Toddlers & Tiaras and her infectious personality was such that it landed her and her family their own TLC show, called Here Comes Honey Boo Boo.

Despite the show being cancelled in 2014, Alana stayed on our screens after appearing in her mother, Mama June’s, tv show Mama June: From Not to Hot.

In March 2019, Mama June was arrested and charged with possession of a controlled substance and drug paraphernalia, after allegedly having crack cocaine and a crack pipe on her.

June stayed away from her children for two years, leaving Alana to be raised by her older sister Pumpkin, real name Lauryn.

Alana opened up on her mum’s drug use, saying: “A lot of folks in this world do not realize how many people are actually really affected by drug and alcohol [use]…

"It's very, very hard. It's something I'd wish on nobody, for real. When my mama got real bad with her [drug use], I didn't know where I was going to end up. I'm proud of myself for how far I've come.”

Alana now attends public high school in Georgia with her boyfriend but admits it’s hard being the only famous kid in school.

“To be honest, I do not have many friends. At all. Because I feel like folks are so much like, oh my God, I'm friends with Honey Boo Boo. I don't trust nobody really, so I don't have friends.”