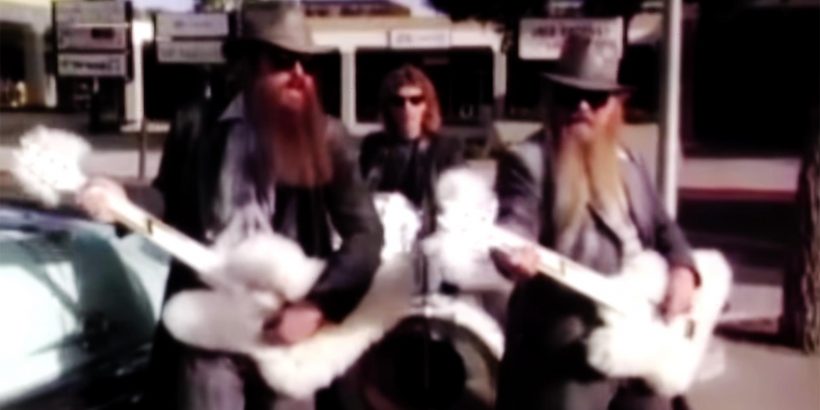 The world is mourning today for the late, great Dusty Hill of ZZ Top, who died Tuesday. He was a beer drinker, hell-raiser, sharp-dressed broom duster, and bassist in the same trio for over 50 years. But Dusty was more than just a legendary bluesman — he and ZZ Top helped define music videos in the early Eighties, conquering MTV with their Eliminator Trilogy. The little ol’ band from Tejas, the most proudly unfashionable rockers around, became MTV’s unlikeliest superstars ever. And they did it without cleaning up their look: beards, hats, cheap sunglasses. As Billy Gibbons shrugged, “Dusty and I don’t fit too well with Giorgio Armani.”

ZZ Top had a long career before MTV even existed. (The channel turns 40 this Sunday.) But they changed everything about their story with their synth-y reinvention on Eliminator and the classic video trilogy of “Gimme All Your Lovin’,” “Sharp Dressed Man,” and “Legs,” made with director Tim Newman. Against all odds, the weird beards turned out to be the old-school rockers best adapted to the Eighties music-video revolution. ZZ Top reveled in the humor and ridiculousness of it all, busting their synchronized dance moves and spinning their white-fur guitars. These guys always got the joke, at a time when other bands were still just nervously lip-syncing in front of brick walls.

ZZ Top embraced the playful gender burlesque of MTV, way ahead of their peers. They were out here in the parking lots of Strip Mall America, tossing the keys to the shy girl who works at Yolanda’s Shoe Salon, rooting for the underdog. The villains in these videos are sexist men — the party girl in “Sharp Dressed Man” gets groped by her sleazy date, until she pours champagne on his crotch. The leering bullies in the “Legs” burger joint get their asses kicked by an alliance of babes and bikers, while ZZ Top cheer them on.

These videos made them heroes to New Wave misfits, winning them a new female fandom. As Dusty Hill told Creem, “The videos have given us a younger audience. You know, our audience grew up with us until the videos, and they were beginning to get a little long in the tooth. Then the videos came along, and now we’ve recaptured the 16-year-old girls. The 16-year-old girls!” To appreciate this quote, keep in mind that in the Eighties, no American male rock bands were willing to admit having teenage girl fans, at least not without treating those girls as a sexualized punch line. ZZ Top were far ahead of their time.

The Eliminator Trilogy was a classic combo of beards, babes, and cars. But as film scholar and babe-culture exegete Abbey Bender has pointed out, “The ZZ Top babes are the feminine mirror image of the band itself.” There’s always a trio of them. The video vixens are superhero feminist avengers, storming into any scene and instantly taking charge. ZZ Top are the Greek chorus, giving a collective thumbs-up. It would have been easier, and more conformist, to make videos where the vixens hook up with the boys in the band. But ZZ Top had a different story to tell. They understood video was drag, just as their beards and shades were drag, so they slid into MTV without losing any of their Tube Snake Boogie Realness.

It began with “Gimme All Your Lovin’” in the summer of 1983, a time when music videos were exploding so fast, each week brought a new revolution. ZZ Top appear as guardian angels to help a hard-luck kid escape his mean old boss at the gas station: the red Eliminator car appears, and out step three foxy ladies who kidnap him for a spin. “Sharp Dressed Man” was twice as great, proving once and for all that ZZ Top were rock’s funniest comedy trio. They slide the ZZ Top keychain to the humble parking valet at a fancy club; the Eliminator girls take him under their wing, dress him up, and bring him back to the club as a star.

But “Legs” was the masterpiece. Like Rocky III or The Return of the King, it was the peak of the trilogy, with ZZ Top coming to the rescue of a plain Jane stranded at the mall, somewhere in the Valley, where she gets bullied by her bosses and customers. ZZ Top to the rescue! The Eliminator babes take the poor girl shopping. (The funniest trying-on-outfits montage of the pre–Crazy Rich Asians era?) The ladies bring her back to confront her bullies. ZZ Top applaud our heroine in her attack on the patriarchy, as she tweaks the nose of one jerk (actually the choreographer). But despite all the lingerie onscreen, they don’t sexualize her — all they want is for her to ride off into the sunset with the boy of her dreams.

Wendy Frazier, who played the heroine, had her 21st birthday on the set; the ZZ Top guys gave her a signed teddy bear. The video vixens have said they got paid well and treated well. One snagged a role in Ghostbusters; another ended up on Real Housewives of Orange County. As Frazier recalled, she was “given the ZZ Top keychain and transformed into a long-legged Tinker Bell.”

For much of their Seventies audience, ZZ Top seemed like a reaction against the phoniness of glam rock. “This is our big chance,” Dusty Hill boasted to Rolling Stone’s Chet Flippo in 1976. “We’re gonna play so well that they’ll forget glitter ever happened.”

But unbeknownst to their fans, ZZ Top had glitter roots, from their early days as glam poseurs. “We used to be in this band called the American Blues,” Hill said. “And we thought it would be kinda neat if everybody dyed their hair blue. It didn’t work; in fact all it ever got us was into fights. Man, I still shudder whenever I heard someone say, ‘Hey, music man’ — that’s how we always used to get called out.”

In other words, this was a band that knew what it was like to get hassled and beaten up for striking a pose. That might help explain why they had no fear about jumping into the anything-goes spectacle of music video, or why they sided with the misfits. A 1983 profile in NME revealed the intriguing detail that Dusty Hill decorated his wardrobe case with two photos of Elvis Presley and one photo of Klaus Nomi. The late German performance artist was an obscure cult figure in his lifetime, best known for his 1979 SNL performance with David Bowie. (Sadly, Nomi became one of music’s first AIDS deaths.)

ZZ Top were always into culture clash. Dusty Hill whipped up “Tush” in 10 minutes at a soundcheck in Florence, Alabama, but it’s a landmark of Yiddish blues poetry. “‘Tush,’ as in ‘that’s a nice tush on that girl,’ that’s definitely the same as the Yiddish word,” Hill told Spin in 1986. “I don’t know how we got it in Dallas. All it could have took was one guy moving down from New York.”

So it makes sense their music also played around with gender clichés. Their smash 1986 synth-pop ballad “Rough Boy” sure sounds like a song about gay-bar cruising, with a video to match. Who was this rough boy? Gibbons explained, “He’s this fictitious character who was the only way that ZZ Top was going to get to play another ballad. The way he came up was, ‘How would a ZZ Top fan allow such a beautiful, lush bed of sound into their realm?’ The pretty music had to have a rough boy in it. He’s there.”

Everybody remembers the Eliminator girls, but don’t sleep on the little-remembered “TV Dinners,” which we all loved almost as much at the time. Instead of a vixen-mobile, the star of “TV Dinners” was a green goblin who terrorizes a video-game dude by hiding in his frozen food. The claymation goblin was intentionally cheap and crummy-looking — a typical ZZ Top power move. The band kept the streak going with their sequel Afterburner, with the high-tech “Velcro Fly” and “Sleeping Bag.” (Very comparable to Rush’s synth experiments on Hold Your Fire and Presto.) But with their Eighties MTV makeover, ZZ Top defined music video at its best — just one of the amazing feats of their ever-amazing career.