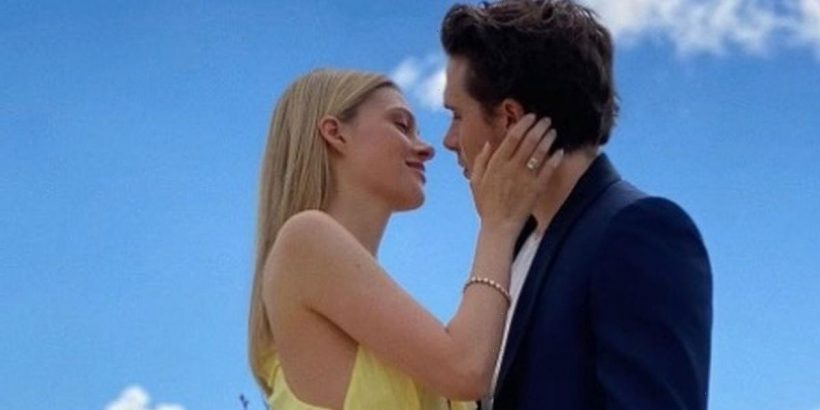 Brooklyn Beckham and Nicola Peltz are official man and wife after they tied the knot at their £3million wedding ceremony yesterday (April 9).

The celebrity power couple said ‘I Do’ at 6pm in the lavish star-studded ceremony where they exchanged their vows in front of 300 guests at Nicola’s Florida family home just off the coast of Miami beach.

Supporting their older brother on his special day, his younger brother Romeo, 19, and Cruz, 17, took their duties as best men very seriously while his 10-year-old sister Harper looked positively stunning as a bridesmaid.

Although pictures of the happy couple have been firmly kept under wraps, we know that Nicola wore a stunning Valentino gown for her big day.

The 27-year-old actress and heiress is thought to have made her 23-year-old groom blush as she left her guests speechless while she walked down the aisle.

After exchanging their emotional vows, Brooklyn planted a lingering six-second kiss on his new wife’s lips as they sealed their union in front of their celebrity friends and family – and then it was time for the pair to dance the night away.

As the newlyweds enjoy the throws of love during their well-deserved honeymoon, Daily Star has taken a look inside the happy couple’s wedding reception.

Branded as the ‘celebrity wedding of the decade’, it’s no surprise that Brooklyn and Nicola’s romantic nuptials was A-list event.

At the top of the star-studded guest list was TV chef Gordon Ramsay and his loving family – who have been close friends of the Beckhams for some time – who were all in attendance.

Spice Girls Mel C and Mel B rocked up to the lavish event but Geri Horner was in Australia at the time of wedding and Emma Bunton struggled to make it to the ceremony.

The ceremony itself was held in the elegant grounds of Nicola’s £76million family home in the heart of Palm Beach.

Out on the lawn, overlooking the sea were three lavish tents which offered their celebrity guests with the exceptional views around the property.

The enormous marquee in the centre of the sprawling garden was thought to have been dedicated to providing their guests with drinks and cocktails throughout the event, while the subsequent tents either side were designated dining and dancing spots.

One tent included a set of stairs which lead down to the sand on the beach, while speakers and a fully kitted-out drum kit took up residence in the corner of the room.

It was initially rumoured that the event would be catered by none other than Gordon Ramsay himself, but as he enjoyed the wedding ceremony as a guest it is understood the star did not provide the food in the end.

Instead, the food came from renowned chef Thierry Isambert who previously cooked for former US President Bill Clinton.

Guests were reportedly treated to “limitless” bottles of £200 Bollinger champagne to wash down their Michelin star food.

There was also a dedicated cocktail tent for people to grab more drinks throughout the evening and even 17-year-old Cruz Beckham was spotted with a beer in his hand at the wedding.

Their heiress’ family are said to have splashed £50,000 on rare orchids which decorated the beautiful dinner tables with the rest of the flowers used in the ceremony also thought to have kept with the white colour scheme.

The beautiful florals were selected by the infamous Rishi Patel at HMR Designs – who also provided the beautiful blooms for the 2021 wedding of Bill Gate’s daughter Jennifer.

While the tables and outdoor furniture hailed from the same designer who organised Chelsea Clinton’s wedding ceremony – Pablo Oliveira at Nuage Designs.

It has been reported that the newlyweds took to the dancefloor at 8.10pm to perform their first dance as man and wife.

According to rumours, the two love birds allegedly chose to dance the night away to the 1961 Elvis hit Only Fools Rush In played by a live singer.

The second song thought to have been performed on the night was the Ben E. King classic Stand By Me, according to DailyMail.com.

Later on in the evening, Snoop Dogg is rumoured to have DJ’d in the largest marquee as previously stating his musical set would be his gift to the couple.

Other musical guests said to have made an appearance at the special event is Marry You singer Bruno Mars as a special guest.

Also on the bill to perform on the night was Latino singer and ex-husband of Jennifer Lopez, Marc Anthony and popular DJ Fat Tony.